Earlier this month, President Biden banned US imports of crude oil, refined petroleum products, natural gas, coal, and coal products that originate in Russia. The President’s executive order, however, does not restrict US energy imports originating in other countries that transit through Russia or depart from Russia’s ports. Crude oil exported from countries including Kazakhstan, Azerbaijan, and Turkmenistan moves through Russia’s energy export infrastructure. Crude oil from Russia can be imported into the US if it is marketed and loaded with a certificate of origin verifying that the crude oil is of non-Russian origin. 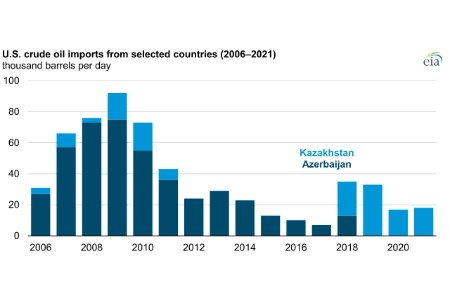 Crude oil exported from Kazakhstan moves primarily through the Caspian Pipeline Consortium (CPC) system. The CPC travels around the north side of the Caspian Sea and through Russia, transporting crude oil produced in Kazakhstan to the Russian Black Sea port of Novorossiysk. Some crude oil produced in Russia is transported in the same pipeline as CPC grade crude oil, but it represents around 10% of the crude oil exported through the CPC system.

Crude oil is also exported from Kazakhstan through Russia’s Transneft pipeline system to Novorossiysk and the Russian Baltic Sea port of Ust Luga, as well as through the Kazakhstan-China Pipeline to China. Most exports originating in Kazakhstan travel by pipelines through Russia or are shipped out of Russia’s ports.

Read the article online at: https://www.worldpipelines.com/business-news/30032022/crude-oil-exports-from-other-countries-may-pass-through-russian-infrastructure/