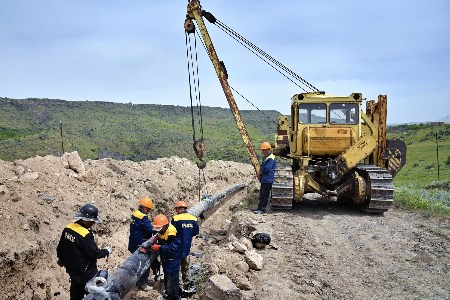 The meetings addressed the development of Armenia’s gas industry. Specifically, the meeting participants noted a high level of gas penetration in the country, amounting to 96%. They also expressed their appreciation for a robust use of natural gas in different economic sectors, including transportation. At present, around 80% of vehicles in the country run on natural gas. Russian gas exports to Armenia stand at some 1.9 billion m3/y. Armenia’s gas consumption is growing this year, with gas supplies from Russia already exceeding 1 billion m3 over the first five and a half months of 2017 (over 35% compared to 2016).

The meeting also touched upon the issues regarding Armenia’s gas supply network development and gas grid expansion, focusing, inter alia, on the General Scheme prepared by Gazprom. The parties discussed the prospects for the construction of a new compressor station at the Abovyanskoye underground gas storage facility and gas trunklines inside the country, as well as for the overhaul of Armenia’s existing gas transmission and distribution infrastructure.

Read the article online at: https://www.worldpipelines.com/business-news/20062017/addressing-the-development-of-armenias-gas-industry/