On 24 February 2022, Russia initiated a further invasion of Ukraine that contributed to the recent sharp increase in the Brent and West Texas Intermediate (WTI) crude oil prices. This sharp rise in crude oil prices reflects increased geopolitical risk and uncertainty regarding how announced and potential future sanctions may affect global energy markets. In the EIA’s March 2022 Short-Term Energy Outlook (STEO), which was finalised on 3 March, they increased their forecast price of international benchmark Brent crude oil to US$116/bbl for 2Q22. The EIA expect gasoline prices to average about US$4.10/gal. during 2Q22 and then decline through the rest of the year. 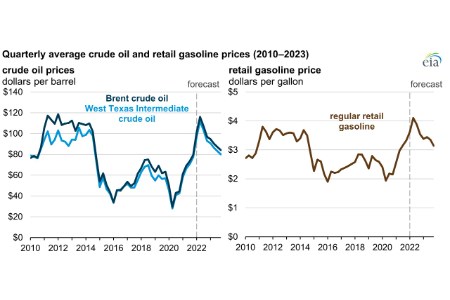 The EIA forecast that the price for WTI, the US benchmark, will average US$113/bbl in March and US$112/bbl for 2Q22. Their forecast is subject to heightened levels of uncertainty due to various factors, including Russia’s further invasion of Ukraine, government-issued limitations on energy imports from Russia, Russian petroleum production, and global crude oil demand.

The EIA’s higher forecast Brent crude oil price also increased their forecast for the retail price of gasoline. The EIA expect gasoline in the US to average US$4.00/gal. this month and to continue rising to a forecast high of US$4.12/gal. in May before gradually falling through the rest of the year. The EIA forecast the US regular retail gasoline price will average US$3.79/gal. in 2022 and US$3.33/gal. in 2023. If realised, the average 2022 retail gasoline price would be the highest average price since 2014, after adjusting for inflation.

In addition, several international oil companies announced plans to stop their operations in Russia and end partnerships with Russian firms, which could limit future crude oil production in Russia. The new announcements could put additional upward pressure on crude oil prices; however, any international response and the impacts those responses may have on global balances are uncertain.

Read the article online at: https://www.worldpipelines.com/business-news/16032022/crude-oil-prices-higher-than-us100bbl-in-coming-months/