Alexey Miller, Chairman of the Gazprom Management Committee, held a meeting in Moscow to discuss the progress achieved in the predevelopment of the Chayandinskoye oil, gas and condensate field and the construction of the Power of Siberia gas trunkline. 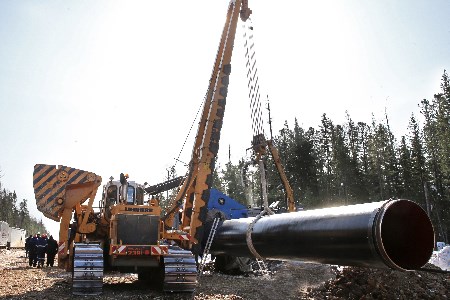 Among those taking part in the meeting were the Deputy Chairmen of the Management Committee and heads of the Company’s structural units and subsidiaries, as well as top executives of the general contractors for construction, namely StroyTransNefteGaz, Stroygazconsulting, Stroygazmontazh, and Neftegazstroy.

The meeting participants noted that the construction of the Power of Siberia gas pipeline was ahead of schedule. Presently, about 979 km of the pipeline are already built, which translates into 45% of the length of the priority section stretching from the Chayandinskoye field to Blagoveshchensk. It is planned to have over 1300 km of the pipeline completed by the end of this year.

Works currently in progress at the Chayandinskoye field include development drilling of gas wells, construction of the comprehensive gas treatment unit and infrastructure facilities, and follow-up exploration of the oil rim. Gas production from the field will start simultaneously with the launch of the Power of Siberia gas trunkline.

It was stressed at the meeting that gas supplies to China via Power of Siberia would commence on 20 December 2019, strictly in accordance with the supplementary agreement to Gazprom and CNPC’s sales and purchase agreement for Russian gas to be supplied via the eastern route.

The meeting produced a number of instructions aimed at ensuring the timely implementation of the Power of Siberia construction project and the pre-development of the Chayandinskoye field.

Read the article online at: https://www.worldpipelines.com/project-news/24082017/power-of-siberia-and-chayandinskoye-field-on-track-for-completion/