Further background information on why Nord Stream 2 is not only an important gas supply line for European customers but also ties into a larger gas corridor. 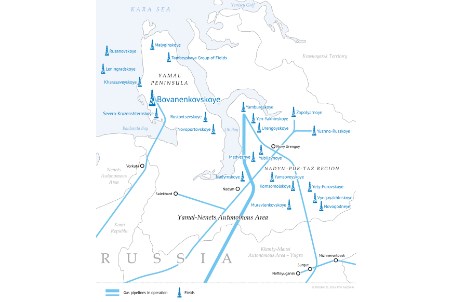 Once completed, Nord Stream 2 will link the Russian Northern Gas Corridor to Europe. Russia has been developing this corridor for the past decade to meet new demand for gas in Northwest Russia as well as abroad. It starts at the gas production fields on the Yamal peninsula in Northern Siberia and feeds into several industrial and export projects in the region of Moscow and St. Petersburg, e.g. for the domestic chemical industry, the residential sector and gas liquefaction plants for LNG export, as well as Nord Stream 2.

Vast reserves of gas are being developed in the Yamal peninsula, which holds more than double the volume of US total reserves, for additional production to meet the higher domestic consumption in Northwest Russia and the increasing international demand.

With the Northern Gas corridor Europe will not only benefit from long term security of supply originating in the world’s largest reserves, but also international consumers in Northwest Europe will be able capitalise on the new route to Europe being around 2000 km shorter than the existing transit systems. It also operates at a higher pressure than other corridors, resulting in lower transportation costs and lower emissions.

In 2017 existing routes to Europe from Russia (via Nord Stream, Poland and Ukraine) were already operating at or near full capacity with flows of 174 billion m3. However, European demand for imports is increasing, both as demand has grown for each of the last three years, and as EU production declines. According to energy experts from IHS Markit, the Northern Corridor provides up to 4.5 times more fuel- and cost-efficient transport for these additional production volumes.

Most of the infrastructure of the corridor is already in operation, and Nord Stream 2 will be one of its final links.

Read the article online at: https://www.worldpipelines.com/project-news/22112018/nord-stream-2-project-fact-box/