The Financial Times reports that the EU has finalised tougher rules on the Nord Stream 2 gas pipeline from Russia to Germany, which will change the operation and economics of the project, but not stop it. 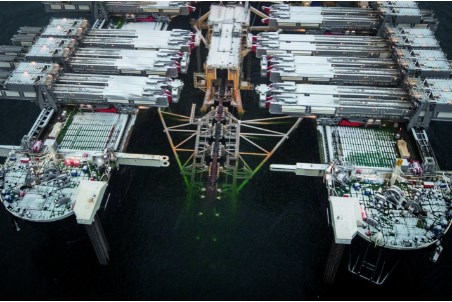 Representatives of EU ministers and the Parliament agreed early on Wednesday to extend EU oversight of the Russian-funded US$9.5 billionn Baltic subsea project, including rules on transparency and shared usage, according to a report in the Financial Times.

A French decision last week to back the proposal cleared the way for the long-stalled negotiations to be concluded in under one week.

Nord Stream 2, which is being built by Russian state-owned Gazprom and is backed by five European energy companies, has stoked political controversy on both sides of the Atlantic because of fears that Moscow could use the pipeline to reduce gas shipments through Ukraine and deny Kiev an important source of revenue.

Critics argue that it is a political rather than commercial enterprise that would double the amount of gas that Russia could send under the Baltic Sea to Germany.

The new regulations require all pipelines on European territory on land and sea to meet the four EU energy rules including non-discriminatory tariffs and transparent reporting of gas shipments. The rules also require at least 10% of the capacity to be offered to third parties, and so-called ownership unbundling, where the pipes are not owned directly by the gas supplier.

Under the final agreement, the member state where an import pipeline lands — in this case Germany — will apply the bloc’s energy rules. A member state can only grant exceptions to the rules under the “strict” oversight from the European Commission.

If fully applied to Nord Stream 2, the rules will change the project’s operation and economics but will not halt it.

EU Energy commissioner Miguel Arias Cañete said: “Today, Europe is closing a loophole in the EU legal framework. The new rules ensure that EU law will be applied to pipelines bringing gas to Europe and that everyone interested in selling gas to Europe must respect European energy law. Together with the previously agreed rules on security of gas supply and Intergovernmental Agreements, Europe has given itself a strong set of tools to deal effectively and collectively with our external energy suppliers.”

US president Donald Trump and US legislators have opposed the new pipeline and threatened sanctions to try to stop the project. While Washington has raised security concerns, the US also has commercial interests in selling US liquefied natural gas to the EU.

Gazprom and the Russian government have long stressed that the pipeline will be built regardless of EU support or the assistance of European partners, and have condemned the US threats as a move by Washington to hurt Russian business interests and support exports of American LNG into Europe.

The pipeline is forecast to be complete by the end of the year, and will be co-financed by five European companies: Engie, OMV, Shell, Uniper and Wintershall.

Read the article online at: https://www.worldpipelines.com/project-news/14022019/eu-finalises-tougher-rules-for-nord-stream-2-pipeline/