The leaks on the Nord Stream pipelines are forming an area of natural gas bubbles about 1 km (1090 yd) in diameter in the Baltic Sea, a video released by the Danish army showed. 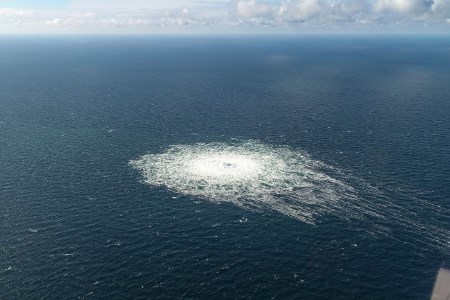 Another smaller area with gas bubbles measured about 200 m in diameter, according to the footage, which the Danish Defense shared on its website and via its Twitter account on Tuesday 27 September.

Germany suspects the Nord Stream gas pipeline system was damaged by an act of sabotage, in what would amount to a major escalation in the energy standoff between Russia and Europe.

The footage, which included images of the leaks from both Nord Stream and Nord Stream 2, was conducted by a Danish helicopter deployed in the area. The army has also said it will send a warship to the Danish Baltic Sea island of Bornholm.

Image: Natural gas bubbles about 1 km (1090 yd) in diameter from leaks on the Nord Stream pipelines in the Baltic Sea on 27 September. (Source: Norwegian Armed Forces)

Read the article online at: https://www.worldpipelines.com/business-news/27092022/nord-stream-leaks-cause-1-km-of-gas-bubbles/