Azerbaijan is an important supplier of crude oil and natural gas in the Caspian Sea region, particularly to European markets. Azerbaijan’s exports of natural gas are poised to become a more significant part of the country’s economy. Azerbaijan produced about 600 billion ft3 of dry natural gas in 2017 and exported about 210 billion ft3, according to EIA’s International Energy Statistics. 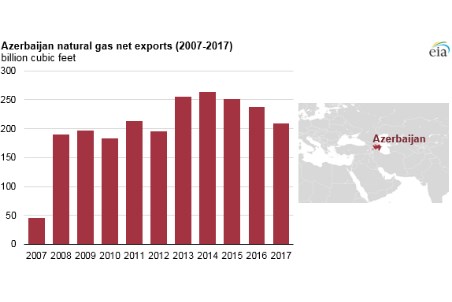 Azerbaijan is planning to expand its natural gas exports to Europe. European Union (EU) leaders consider connecting Azerbaijan’s Shah Deniz natural gas field to Southern Europe to be a step toward the strategic goal of diversifying Europe’s natural gas supply. Southern and Eastern Europe, in particular, have limited supply options for natural gas because of geographic constraints and infrastructure limitations.

The Shah Deniz field, which is about 40 miles southeast of Baku in the Caspian Sea, contains most of Azerbaijan’s natural gas. In 2017, the field produced about 360 billion ft3 of natural gas and about 19 million barrels of condensate. The main markets for Shah Deniz gas have been Azerbaijan, Georgia, and Turkey.

In mid-2018, the field’s second stage of development, Shah Deniz 2, came online and began delivering natural gas to Turkey, which EIA includes in its definition of Southern Europe. Shah Deniz 2 will also add 38 million to 44 million bbls of condensate production capacity per year.

The natural gas produced at Shah Deniz 2 will flow west through an expanded pipeline network known as the Southern Gas Corridor (SGC). Turkey started receiving Shah Deniz 2 natural gas in 2018 through the South Caucasus Pipeline Expansion (SCPX), which runs from Azerbaijan to the Georgia-Turkey border.

The 1.5 billion ft3/d Trans-Anatolian Natural Gas Pipeline (TANAP), which runs from the Georgia-Turkey border and is being extended to the Turkey–Greece border, was completed in June 2018 and has provided additional natural gas capacity into Southern Europe. Volumes of natural gas shipped via TANAP reached 0.1 billion ft3/d in 2018 and are expected to increase to 0.2 billion ft3/d in 2019. The Trans Adriatic Pipeline (TAP), which is slated to run from the Turkey-Greece border to Italy, is expected to be completed in 2020.

Of the expected 565 billion ft3 of annual natural gas production at Shah Deniz 2, Turkey has contracted for 211 billion ft3, and European markets have contracted for the remainder. Some deliveries will go to Greece, Bulgaria, and potentially Albania, and the rest will be delivered to the Italian national transmission network before possibly flowing north to Central Europe.

Read the article online at: https://www.worldpipelines.com/business-news/15022019/eia-azerbaijan-natural-gas-report/