On 5 December 2017, the Urdomskoye Gas Pipeline Operation Centre (GPOC) – a large company doing business in the Arkhangelsk Region and one of the 14 GPOCs owned by Gazprom Transgaz Ukhta – marked its 45th anniversary. 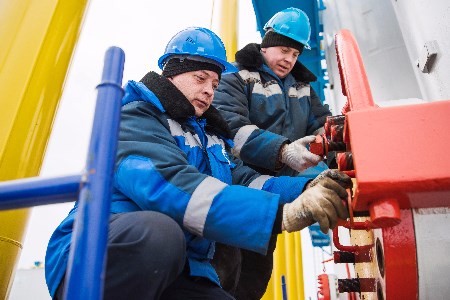 Currently, Urdomskoye services several vital facilities: a section of a six-string gas pipeline, CS-13 compressor station, as well as a complex of systems and installations ensuring efficient gas transmission. The Centre’s inception dates back to the mid 1960s, when the Vuktylskoye gas and condensate field was put into production. CS-13 became operational in Urdoma in 1972, connecting the northern and southern sections of the Ukhta-Torzhok gas pipeline. 1975 can be considered the formation year for the Centre: it was then that Urdomskoye evolved into a steadily operating company with a well-knit team who was responsible for the Centre’s further development: construction of the second string at the Ukhta-Torzhok gas pipeline and additional workshops of CS-13 for the third and the fourth strings. In parallel with operational tasks, social issues were gradually resolved as well.

“Today, the Centre continues its efforts initiated in the early 2000s when the significant projects were implemented: construction of the SRTO-Torzhok gas transmission system, revamp of the third workshop, and overhaul of the system’s linear part. We are glad to see that young people join us, which means that we will have enough human resources to carry out the ongoing projects for the construction of the seventh string of the gas pipeline and the seventh shop. I am confident that our team is able to handle the tasks of any complexity,” said Andrey Shabanov, Head of the Urdomskoye GPOC.

Read the article online at: https://www.worldpipelines.com/business-news/12122017/gazproms-urdomskoye-gpoc-celebrates-its-45th-anniversary/