The Gas Export and Enhancing Reliability of Gas Supply to Europe press conference was held in Moscow on 6 June in the lead-up to the annual General Shareholders Meeting. The press conference featured Alexander Medvedev, Deputy Chairman of the Management Committee, Pavel Oderov, Head of Department, and Elena Burmistrova, Director General of Gazprom Export. 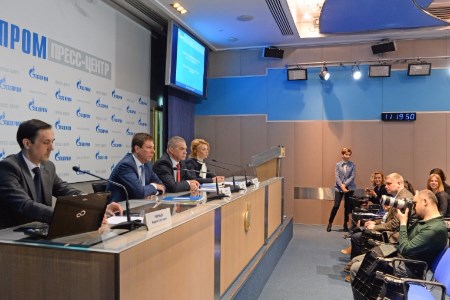 It was noted that in 2016 Gazprom’s exports to Europe had hit a record of 179.3 billion m3, which was 19.9 billion m3 more (over 12.5%) than in 2015. The largest buyers were Germany, Turkey, and Italy. For instance, Germany, Gazprom’s number one market in Europe, imported 49.8 billion m3 of Russian gas, a historical high for the country.

Gazprom takes consistent efforts aimed at establishing more reliable and cost-effective routes for supplying gas from Russia to Europe. Specifically, the Company continues the construction project for the Nord Stream 2 gas pipeline with the annual capacity of 55 billion m3 of gas. On 24 April 2017, Nord Stream 2 AG signed the financing agreements for the project with the leading energy companies ENGIE, OMV, Royal Dutch Shell, Uniper, and Wintershall. Pursuant to the documents, those companies will provide long term financing for 50% of the total cost of the project.

On 7 May 2017, the construction of the TurkStream gas pipeline began. Its first string will make it possible to annually deliver 15.75 billion m3 of gas to Turkey, and the second string will convey the same amount of gas to southern and southeastern Europe.

Gazprom continues to expand its underground gas storage capacities abroad. In the Czech Republic, the Damborice UGS facility with the design working capacity of 456 million m3 came onstream on 1 July 2016. At the moment, Gazprom can use 156 million m3 of the facility’s capacities, with the maximum daily deliverability standing at 3.7 million m3. The underground storage capacities located close to sales markets allow the company to smooth out seasonal consumption peaks, which makes supplies much more reliable.

Read the article online at: https://www.worldpipelines.com/business-news/12062017/gazproms-exports-to-europe-hits-record-high/