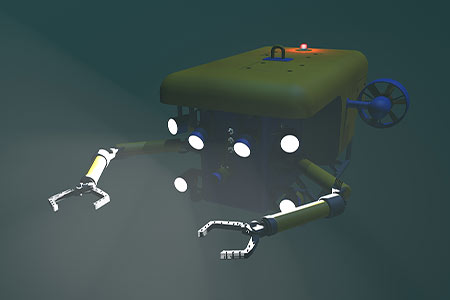 In May 2020, Deep BV, a survey company specialising in hydrography, marine geophysics, and oceanography, upgraded its underwater survey vessel with a Sea Machines SM300 autonomous command and remote-helm control system. The Sea Machines system enables remote command of the vessel, including navigation and positioning, the control of onboard auxiliaries and sensors, and ship-to-shore data flow.

Deep operators can command and control the unmanned vessel and all onboard payloads (including survey sonars, hydrophones, winches, cranes, and davits) from its shore-side Survey Control Room, which has been equipped to manage several surveys simultaneously. Deep is transferring all collected data from the vessel to the control room via 4G and satellite connection. The combination of Sea Machines' technology and the Survey Control Room has enabled Deep to shift from minimally manned missions to unmanned missions.

Launched in April 2019 by Aquabotix (Australia), SwarmDiver is the first commercial hybrid vehicle that can be used as both an unmanned ground vehicle (UGV) and an unmanned underwater vehicle (UUV) in a swarm. Its swarm can be controlled on the surface by a human operator as a single coordinated entity, which dives on command. Since it is able to function like a UGV, SwarmDiver solves the problem of slow underwater communication caused by the use of acoustic waves; it can transmit data through electromagnetic waves once on the surface in the UGV mode.

Application areas of SwarmDiver include defence and security, environmental monitoring, harbour management, and plume tracking and research. A bio-inspired mini robot weighing 3.7 lb, SwarmDiver is 29.5 in. long, and has an endurance of 2.5 hr with a diving reach of 150 ft. It measures the temperature and pressure of the water and can be tracked through GPS at a maximum depth of 3.3 ft from the surface of the water. In January 2019, Aquabotix (Australia) received a contract worth US$70 000 from the US Navy for the further development of SwarmDiver.

Electric Systems: The fastest-growing segment of the ROV market, by propulsion

North America: The largest contributing region in the UUV market

North America includes the US and Canada. The US is one of the largest global developers, operators, and exporters of unmanned military systems. Thus, it accounts for a large share of the North American region in the global UUV market.

The main functions of UUVs include ensuring marine border security, intelligence, surveillance and reconnaissance (ISR), and anti-submarine warfare. North American countries are awarding several contracts to major players in the UUV market to deliver UUVs with combat capabilities, thus driving the growth of the UUV market in the region.

Read the article online at: https://www.worldpipelines.com/special-reports/20012023/unmanned-underwater-vehicles-industry-projected-to-reach-us74-billion-by-2027/