2020 is surely going to be a very difficult year for China’s economy and energy industry. Particularly, the Chinese pipeline sector will suffer as certain developments have put on hold many new and proposed projects, and ensured the under-utilisation of pipelines in operation. 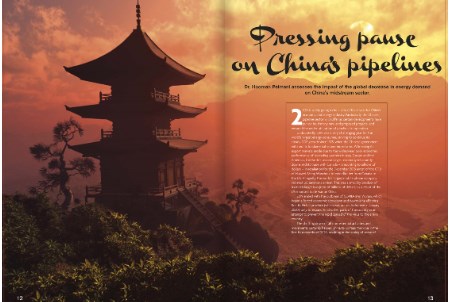 Undoubtedly, 2019 was a very challenging year for the world’s largest energy consumer, striving to continue its steady GDP growth since 1978, when the Chinese government initiated its fundamental economic reforms. Witnessing its export markets erode due to the widespread poor economic performance of its trading partners in Asia, Europe and the Americas, the world’s second largest economy reluctantly downsized its trade with Canada – amounting to billions of dollars – in retaliation for the December 2018 arrest of the CFO of Huawei, Meng Wanzhou, to extradite her from Canada to the US. Allegedly, the world’s largest mobile phone company violated US sanctions on Iran. This was a small by-product of its much larger loss (tens of billions of dollars) as a result of the US-imposed trade war on China.

2019 ended with the outbreak of COVID-19 in Wuhan, which began a forced economic slowdown and downsizing affecting first its Hubei province (which was put on lockdown in January 2020), only to expand to all other parts of the country in an attempt to prevent the rapid spread of the virus to the entire country.

The shutting down of all non-essential activities and movements certainly helped China to contain the virus in the first four months of 2020, resulting in the easing of some of the restrictions in Hubei province in April, but not all over the country for fear of a second wave. Putting Henan province’s Jia county on a total lockdown in that month to avoid this threat indicated that the return to business-as-usual will take much longer than containing the COVID-19 pandemic.

The unparalleled decrease in China’s industrial activities, transportation and trade has pushed its economy into a major contraction, which is set to become worse because of the spreading contraction in global economic activities for the same reasons. An extraordinary drop in China’s energy consumption is the natural outcome of this development, as also experienced in other countries.

On a positive note, the forced downsizing of the Chinese economy caused by a large-scale closure of all human-intensive activities has resulted in a drastic reduction in its greenhouse gas emissions, amounting to 250 million t between early February and mid-March, as The Guardian reported in April.

However, the growing lockdowns of cities all over the world have been pushing the global economy into a deep recession. This will further decrease China’s ability to recuperate from its own lockdown period, recover from its last year’s comparatively poor economic performance, and compensate for its loss of markets because of the ongoing trade wars through a major increase in its exports. The solution is a gigantic economic boost for which there is no realistic ground.

Thanks to its large domestic market, China could, of course, consider an inward-looking economic growth strategy as an option, which will likely happen for a while. However, the necessary large growth of its domestic economy demands enormous investments in the forms of mega projects, which is not feasible in the short-run.

Hence, 2020 will certainly be the most difficult year for China since 1978. The unsurprising result is a major decrease in its energy demand to affect its pipeline activities, as there is no market for filling China’s existing pipelines with oil and gas, yet alone embarking on new major projects beyond completing the existing ones designed to meet China’s eventual rise in energy demand.

China is currently constructing the middle section of its East Route Gas Pipeline (ERGS) whose north section went online last December, through which China has received Russian gas. That ended its almost exclusive dependency on Central Asian gas for piped imports supplied through the three operational lines (Lines A, B and C) of the Central Asian Gas Pipeline (CAGS) with designed capacity of 55 billion m3/y, accounting for approximately 40% of China’s imported gas prior to 2020, apart from its small imports from Myanmar (3.1 billion m3 in 2018).

Shelved after some limited work in 2017, there is now news on resumption of work on parts of Line D passing through Tajikistan with a firm and official statement by the CAGS’s undertaker, CNPC, on the line’s scheduled operation date demanding the completion of its Uzbekistan and Kyrgyzstan sections as well.

Nevertheless, this development and China’s work on the ERGS’s middle section indicate Beijing’s long-term thinking and its continued commitment to reduce China’s GHG by replacing coal with less pollutive natural gas. Otherwise, a major global economic recovery to restore and expand the markets for China’s resumption of its large exports will be unlikely to happen in the near future to justify importing more gas, when China is unable to honour all its gas import deals. As Reuters reported in February, CNOOC, China’s largest LNG importer, suspended contracts “with at least three suppliers amid the rapid spread of the coronavirus” by declaring force majeure, which “allows companies to suspend their obligation to fulfil contracts after unexpected events such as strikes and natural disasters.”

It also reported in March Kazakhstan’s reduction of “gas supplies to China by 20 - 25%,” according to its Energy Minister Nurlan Nogayev, as “importer PetroChina issued a force majeure notice to suppliers this month.”

In particular, there is no reliable and firm report on major import-related pipeline projects to be discussed or concluded. Hence, the West Route Gas Pipeline (WRGP) seems not to be on the Chinese agenda, a project to increase China’s annual gas imports from Russia by an additional 30 billion m3 pursued enthusiastically by Gazprom since 2015. Nor is there any report on China seriously discussing Russian gas imports via Mongolia through a pipeline much shorter than the latter (2800 km) as raised by Mongolian President Khaltmaa Battulga in September 2018, during the meeting of the Eastern Economic Forum in Vladivostok. China’s major pipeline projects are discussed in light of this background.

Read the article online at: https://www.worldpipelines.com/special-reports/09072020/pressing-pause-on-chinas-pipelines-a-china-pipeline-update/