Dr. Hooman Peimani considers the current midstream market in Russia and its struggle, along with the international economy, in the face of falling oil and gas prices and a global pandemic.

Perhaps 2020 should be described as the year of uncertainty for all oil and gas exporters, and Russia is no exception. However, what is certain about this year is a phenomenally lower income for all oil and gas exporters than that of the previous year, and less cash for pipeline projects as energy exporters slash spending to preserve their cash for rainy days – since a major market recovery to compensate for their losses is unlikely in the near future. 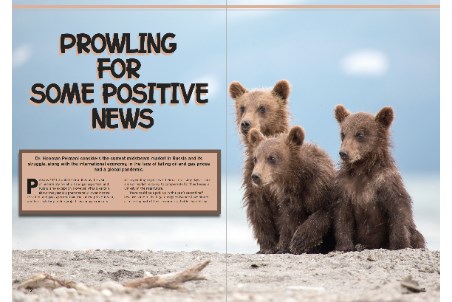 There could be a pick-up in this year’s second half because some of the large energy consumers have hinted at restoring part of their economic activities hard hit by the COVID-19 pandemic, notably the world’s engine of economic growth and largest energy consumer, China. However, even if such an aspirational goal becomes a reality, the conceivable rise in the global energy demand will not be large enough to compensate for the 2019 losses and the far larger ones of 2020. After all, there is uncertainty about the extent of China’s success in achieving that objective, especially when the pandemic’s ongoing and rapid expansion to other parts of the world – including all the Asian, European and North American trading countries and large energy consumers – will restrict China’s export markets.

In addition, as a preventative factor, the existence of too many oil and gas exporters desperate to generate revenue will likely further flood the already saturated oil and gas markets with their products to ensure the continuity of low prices in 2020.

Consequently, short of a quick end to the pandemic and a rapid global economic recovery of which there is no sign, Russia will remember 2020 as the most difficult year for its oil and gas industries since 2000. Like other energy exporters, Russia experienced major difficulties in 2019 as a result of the steady lowering of oil and gas prices caused by a poor global economic performance. Additionally, in April, its energy exports were further damaged by ‘tainted oil’ when organic chlorides were found in the crude oil exported via the Druzhba pipeline. This halted the country’s oil exports to Europe through the pipeline for some time and forced Russia to clean up its export infrastructure and compensate for damages demanded by some of the importing countries – which amounted to billions of dollars in lost revenue.

However, as strange as it may sound, the developments of 2020 make 2019 a year to yearn for Russian energy exports. Against a background of sustained lowering oil and gas prices due to the continued weak global economic performance with a corresponding declining energy demand, the COVID-19 pandemic has been pushing the global economy into a major recession yet to be admitted. The phenomenal loss of jobs has a potential to turn this into a depression because, if the current rate continues, it could overwhelm the global welfare system and cause widespread poverty and low income, only to further deteriorate the global economy and plunge energy demand.

The opportunistic, but surely thoughtless, price war between Saudi Arabia and Russia, and Russia’s initial refusal until early April to join OPEC+ to stop flat falling oil prices by joining a major production cut, has further lowered prices. This is an unsurprising outcome of flooding an already saturated global oil market with cheap Russian and Saudi oil, whilst the market is shrinking and demand for energy, in general, is plummeting.

The availability of a huge amount of piped gas and LNG for the contracting energy demand has pushed oil prices further down, even to a single digit in the major US hubs, e.g. Bakken crude in Guernsey/Wyoming at US$3.18/bbl and West Texas Sour at US$7.18/bbl, as Bloomberg reported in March.

Russia has surely not achieved its immediate objective of increasing its revenue through more exports at lower prices, nor its longer-term objective of enlarging its oil market share by establishing itself as the understanding oil supplier to the needs of the European and Asian heavyweights. Likewise, Saudi Arabia’s efforts to expand its global share by flooding the markets with its cheap oil, whilst stifling the US unconventional oil producers and, perhaps, ensuring the total elimination of the Canadian ones, has proven to be equally unsuccessful.

Aside from the Canadian oilsands producers being already on their knees due to the low oil prices far below their production costs, the ending of the US oil bonanza through lowering oil prices – if this was the main objective – is not sustainable for all oil exporters, especially Saudi Arabia, which has experienced a phenomenal loss of oil revenue caused by its lowering prices.

Reports of a possible rapprochement between Russia and Saudi Arabia to end their self-destructive price war detrimental to all the OPEC and non-OPEC oil exporters, including those in the US, have gained credibility as Russian President Vladimir Putin declared willingness to accept a major joint reduction with OPEC+ of 10 million bpd on 3 April. This followed US President Donald Trump’s stating such possibility and even a much larger one (15 million bpd) after talking to Saudi Crown Prince Mohammed bin Salman. After a series of ups and downs in the negotiations between the two sides raising doubts about its feasibility, an agreement was finally made for a reduction of 10 million bpd starting from May. However, this reduction will not be enough to push oil and also gas prices significantly high and sustain them for the rest of the year whilst the estimated overproduction of oil is approximately 30 million bpd, in the absence of a major resumption of global economic activity. Such a return does not seem feasible in a meaningful manner, given the global spread of COVID-19 and the widening imposition of stringent measures to stop the pandemic by ending major labour-intensive economic activities, locking down people, and heavily restricting transportation.

In this situation, the additional unilateral reduction of oil production by other oil exporters (e.g. Norway) and major oil corporations, including those in the US (e.g. Chevron), in April and May have failed to change the direction of oil prices, apart from marginal short-term improvements. Emerging plans in some of the countries affected by COVID-19 to gradually ease some restrictions are also unlikely to lead to a major sustainable increase in oil and gas demand that would prompt a substantial rise in prices.

Nevertheless, Russia’s pipeline industry has scored major achievements, evident in the December 2019 inauguration of the vast joint project of Gazprom and CNPC – the East Route Gas Pipeline (ERGS) – which has opened the large Chinese gas market to Russia. This was followed by Gazprom’s completion of the TurkStream and initiating gas exports to Turkey and Bulgaria in January, while working on connecting the pipeline to Serbia and Hungary. Being the replacement of the South Stream shelved in 2014 under EU pressure, the pipeline’s operation intended to increase Russian gas exports to the EU is surely a major breakthrough for Moscow, both for its economic gains and its political value.

The US’s imposing of sanctions in December 2019 on companies laying the remaining stretch of Russia’s third major gas export project, Nord Stream 2, is a temporary setback for Moscow. Meant to open the EU market for US LNG exports and weakening Russia for strategic considerations, the move abruptly stopped the pipelaying operation in the Danish Baltic Sea’s exclusive economic zone (EEZ) to delay the pipeline’s completion. Furthermore it widened the schism between the pipeline’s EU stakeholders and the US over what they describe as Washington’s interference in their domestic affairs.

To read the rest of this article, which includes project updates for the East Route gas pipeline (ERGS), Nord Stream 2 and Turkstream, please download the full issue of World Pipe-lines' June issue for free here.

Read the article online at: https://www.worldpipelines.com/special-reports/08062020/prowling-for-some-positive-news-russian-pipeline-update/