In the EIA’s Annual Energy Outlook 2022 (AEO2022), Issues in Focus: Exploration of the No Interstate Natural Gas Pipeline Builds, they analyse the effects on the energy market if no additional US natural gas pipeline capacity is built between 2024 and 2050. In the No Interstate Natural Gas Pipeline Builds case, the EIA project 5% less natural gas production and 4% less natural gas consumption in 2050 compared with the Reference case. They also project that the Henry Hub spot price in 2050 would be 11% higher in that case than in the Reference case. 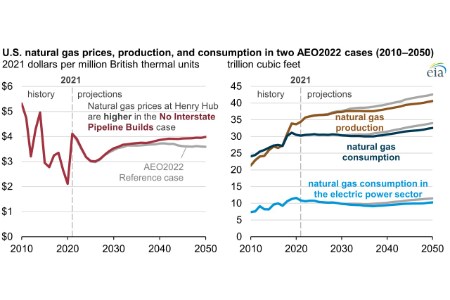 Restricting US interstate pipeline builds in the EIA’s projection results in 7.4 billion ft3/d less interregional capacity in 2050 than in the Reference case projection, which, for example, limits the amount of natural gas that can flow from the Appalachia production region to demand areas such as the Midwest.

The EIA project that restricting interstate US natural gas pipeline capacity would only slightly lower energy-related CO2 emissions in the US relative to the Reference case. Total CO2 from all fuel sources in 2050 are 4% lower in the No Interstate Natural Gas Pipeline Builds case than in the Reference case. The relatively small effect on CO2 emissions, despite the decline in natural gas consumption and growth in electric power generation from renewable sources, is due to the EIA’s forecast of increased coal-fired power generation, which would be more carbon intensive than the natural gas-fired generation it displaces.

Read the article online at: https://www.worldpipelines.com/special-reports/04042022/the-effects-of-not-building-future-interstate-natural-gas-pipelines/