In 2020 and 2021, more than 2000 miles of new liquids pipelines were brought into service, according to our Liquids Pipeline Projects database. Several of these recent infrastructure projects were dedicated to transporting a mix of natural gas plant liquids (NGPLs), which are produced at natural gas processing plants from raw natural gas streams. 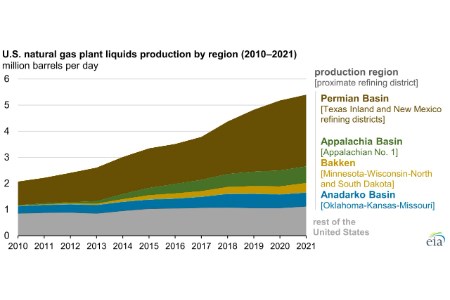 Of the 14 Y-grade pipeline projects completed in the past two years, 5 projects, accounting for more than 800 000 bpd of new capacity, originate in the Permian Basin of West Texas and Southeast New Mexico. Natural gas production in the Permian Basin tends to have more NGPL content relative to the total volume of raw natural gas produced than most other basins in the US.

Read the article online at: https://www.worldpipelines.com/special-reports/03032022/new-pipelines-carrying-natural-gas-plant-liquids-increase-natural-gas-processing/