As part of GAZ-SYSTEM’s construction of the Tworóg–Kedzierzyn-Kozle gas pipeline, a pipeline with a length of 760 m and diameter of 1016 mm was laid under the Kedzierzyn Canal using the HDD method. 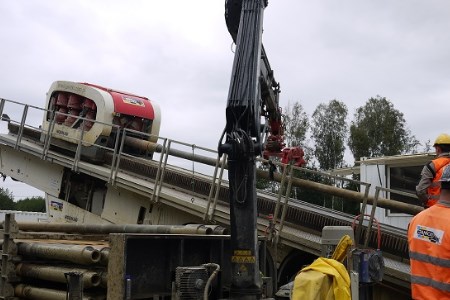 Installation of the pipeline under the Kedzierzyn Canal was completed in 8 hrs, and it took 42 days to drill the hole up to a diameter of 1320 mm. The section of the gas pipeline (lyre) prepared to be pulled in passed above an active process pipeline, which meant that it was necessary to protect this pipeline by lifting the lyre on a dedicated structure. “This was the second and last HDD drilling related to the construction of the Tworóg–Kedzierzyn-Kozle gas pipeline. The first one, which was 750 m long, passed under the Gliwice Canal, Klodnica River and the Bojszówka River,” said Artur Zawartko, Vice-President of GAZ-SYSTEM.

“We carried out construction works for both drilling operations in the forests managed by the Kedzierzyn Forest Division, which is why co-operation with this authority was so important both during engineering and construction,” emphasised Kazimierz Blaszczak, Project Manager for the Tworóg–Kedzierzyn-Kozle gas pipeline.

The construction of the Tworóg–Kedzierzyn-Kozle gas pipeline with a length of 43 km and a diameter of 1000 mm started at the beginning of this year. At present, the construction contractor, IDS-BUD, is finishing the placement of pipes and weights in the installation area; it has completed approximately 45% of line welding activities, and it is preparing to lay the pipeline in the trench. In the period from November to December 2018, the contractor is planning to install the gas pipeline under the A4 motorway using the microtunneling method.

The Tworóg–Kedzierzyn-Kozle gas pipeline will be connected with the gas pipelines that are currently being constructed: Zdzieszowice–Kedzierzyn (from the west) and Tworóg–Tworzen (from the east). After they are completed, the gas pipelines will be part of the structure of the North-South Gas Corridor, and they will be an important contribution to the security of the transmission network.

Both drilling operations were performed by ZRB Janicki.

Read the article online at: https://www.worldpipelines.com/project-news/19102018/hdd-method-used-for-construction-of-gaz-systems-pipeline/