Working meetings of Alexey Miller, Chairman of the Gazprom Management Committee, with Zhang Gaoli, Vice Premier of the State Council of the People’s Republic of China, and Wang Dongjin, Vice President of CNPC, took place in Moscow on 11 April. 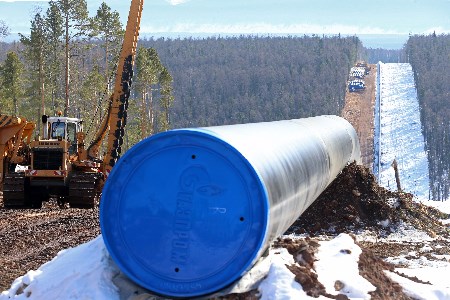 The parties discussed the focus areas of Russian-Chinese co-operation in the gas sector, specifically the projects for Russian gas supplies to China, including via the eastern route – through the Power of Siberia gas pipeline – and from Russia’s Far East. It was noted that over 650 km of the Power of Siberia gas trunkline had been built up to that moment, with 927 km of the pipe string welded.

A temporary two way checkpoint was built on the state border as part of the construction project for the crossing under the Amur River within Power of Siberia’s cross-border section. The checkpoint will provide unfettered access to the restricted area for operating personnel and construction equipment. The checkpoint is scheduled to open in May.

The meeting participants also addressed such issues as the co-operation in the gas storage, NGV and power generation sectors and the organisation of the Silk Way Rally 2017 Russia-Kazakhstan-China.

Read the article online at: https://www.worldpipelines.com/project-news/13042017/russia-and-china-discuss-gas-supplies-and-pipelines/

Plains All American has announced the release of its 2020 Sustainability Report.