Five months after marking the start of construction of the Trans Adriatic Pipeline (TAP) in Albania, on 7 March, eleven Ambassadors and diplomatic representatives resident in Albania visited the TAP project works currently underway in Ura Vajgurore, in the Berat region. TAP representatives – including Commercial and External Affairs Director Ulrike Andres and Country Manager for Albania Shkelqim Bozgo – provided a progress overview as well as an outline of some of the activities TAP will be carrying out throughout 2017. 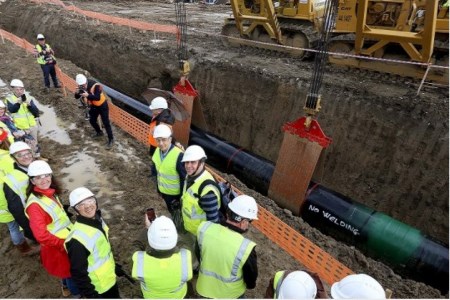 Ulrike Andres, Commercial and External Affairs Director of TAP, said: “TAP is a highly strategic project for the European gas market. Once natural gas from the Shah Deniz II field starts flowing through TAP in 2020, several markets will benefit from increased gas supply security and diversification.

“We are thankful to the Albanian authorities for their strong collaboration, which enabled TAP’s good progress. So far, in Albania, we have cleared and graded more than 72 km, strung over 62 km of line pipes, welded another 52 km and backfilled approximately 40 km,” she added.

The Ambassadors were pleased to learn more about TAP’s benefits to Albania. To date, more than 1700 employees, approximately 84% Albanians, have been directly employed in TAP’s construction processes. Additionally, several roads and bridges have been upgraded, connecting remote villages with urban areas. Also, a number of social and environmental investment projects are under way: refurbishment of several schools along the TAP route, projects that promote tourism, etc. Last but not least, numerous local companies have been subcontracted to offer their services and expertise for the construction of the onshore pipeline segment in Albania.

In total, the Ambassadors and diplomatic representatives from eight countries took part in the visit:

Read the article online at: https://www.worldpipelines.com/project-news/10032017/tap-provides-overview-to-several-ambassadors-visiting-albania-site/