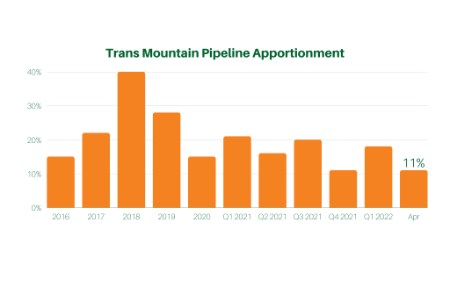 When a pipeline experiences significant and prolonged apportionment like in the case of the existing Trans Mountain Pipeline, it’s one signal that more capacity is needed. Apportionment can bring with it a discounting of prices as producers compete to sell what they can through the pipeline before having to use another pipeline or other modes of transport to another, less profitable market. It can also mean the buyers at the end of the pipeline are forced to source their shortfall of supply from alternate, less desirable sources.

Business case for expansion is strong

There is a strong and clear business case supporting the Trans Mountain Expansion Project. Trans Mountain Pipeline’s shippers have made long-term contract commitments ranging from 15 to 20 years that will underpin the cost of construction and the operating costs. The additional capacity offered by the expansion will be used to supply more crude oil and refined products markets in British Columbia and Washington State and to offshore markets in the Asia Pacific. Pipeline design and operations, including emergency response and preparedness for tanker movements are world-class, providing a safe and reliable supply of petroleum products to the markets served by the Trans Mountain Pipeline.

Read the article online at: https://www.worldpipelines.com/project-news/08042022/trans-mountain-pipeline-system-april-2022-capacity-announcement/