Over the next couple of months, one of the world’s largest offshore pipelay vessels, Solitaire, will install a 374 km long section of the pipeline in the Finnish Exclusive Economic Zone (EEZ), moving towards Russia. 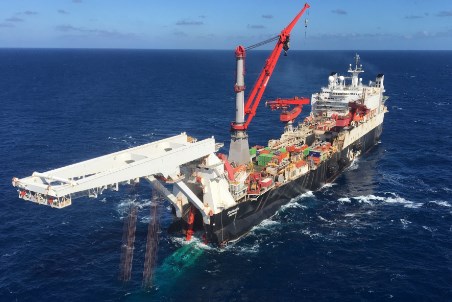 The beginning of pipeline construction in Finnish waters follows extensive preparatory works along the pipeline route and near the landfall site in Germany, marking another milestone for the project.

With construction of the twin 1230 km pipelines planned for mid-2018 through 2019, the project is progressing on schedule. By end-August, all 200 000 line pipes had already been delivered from the pipe mills to the coating plants in Kotka (Finland) and Mukran (Germany), and more than half (63%) of the pipes had been concrete weight coated.

All the required construction permits have now been awarded by the authorities in Germany, Finland, Sweden and Russia, which effectively confirms that the project complies with all applicable national and EU laws and regulations and international conventions. Denmark has not yet reached a decision on the permit application which was submitted in April 2017.

Preparatory construction works are ongoing in Germany, Sweden, Finland and Russia based on the permits we have received. For example, crossings have been installed in Finnish and Swedish waters to protect existing infrastructure, such as cables and the Nord Stream pipeline. Clean, crushed rock has also been placed at specific locations along the route where the seabed is uneven. In Germany, the offshore laybarge Castoro 10 has connected Nord Stream 2’s landfall facilities with the new offshore pipeline.

And as part of comprehensive preparatory activities at the Russian landfall, a temporary camp with a peak capacity of 570 people and has been built to accommodate construction personnel. Road construction in this area is also underway.

Nord Stream 2 is committed to meeting the highest standards of health, safety, reliability, quality and the mitigation of potential impacts on the environment. Accordingly, the pipelay vessel Solitaire was equipped and tested by Allseas to meet the project's strict requirements, and finally verified by an independent certification authority (DNV-GL) before the start of construction.

The vessel is well equipped to ensure additional safety in the congested Gulf of Finland with its mine-lines and munitions from the World Wars. Solitaire operates without anchors and uses a dynamic positioning system with thrusters to position itself accurately, thus only the pipeline touches the seabed. Solitaire is 300 m long and 41 m wide and can accommodate up to 420 people. The ship will lay pipes around the clock seven days a week at a rate of approximately 3 km a day. Pipe supply vessels will deliver the 12 m, 24 t pipes to the pipelay vessel from the project’s nearest logistics hubs in Kotka regularly to maintain the necessary just-in-time pipe stock.

The pipes are welded together onboard the vessel, welds are tested and finally the pipeline is lowered down to the seabed.

A survey vessel will perform surveys before and after pipelay to verify that the pipeline is located in its correct position. All works are carried out in compliance with the national permit provisions and overseen by the relevant authorities.

Nord Stream 2 was much in the news during the summer around President Trump’s visit to Europe and his vigorous repeated attacks on Germany and Nord Stream 2. Most Europeans seem to disagree with Trump’s opinions: according to a recent opinion poll, 66% of Germans think building Nord Stream 2 is the “right choice” and that recent criticism by President Trump was fuelled by his own economic interest in increasing sales of US LNG in Europe.

Despite US claims about Nord Stream 2, European industry is clear about the need for more gas import infrastructure at a time of rapid decline in European gas production.

The EU Commission’s proposal to amend the Gas Directive so that it would apply internal EU market regulations to import pipelines from third countries (i.e. outside the EU) is still being discussed by Member States. A recent study by the Oxford Institute of Energy Studies concluded that the Commission’s proposal “will politicise – and ultimately undermine – an EU regulatory framework that has been painstakingly constructed over several decades.” Furthermore, the paper argues that the Commission is using the amendment “to create intentionally a conflict of laws - where none currently exists – in order to create a legal rationale for getting a mandate from the Council to negotiate an agreement on Nord Stream 2 with the Russian government.” It should also be noted that the EU Council’s Legal Services had said there was no legal rationale for such a mandate.

Read the article online at: https://www.worldpipelines.com/project-news/05092018/nord-stream-2-starts-pipelaying-in-gulf-of-finland/