Last week, dynamically positioned pipelay vessel Pioneering Spirit joined Nord Stream 2’s construction fleet and started pipelay works in the Finnish Exclusive Economic Zone (EEZ). She will continue installation of the natural gas pipeline following pipelay vessel Solitaire, which started construction in Finland in September. Solitaire has moved to the southern part of the Swedish EEZ, where it will start construction of the 510 km section there for the next few months. 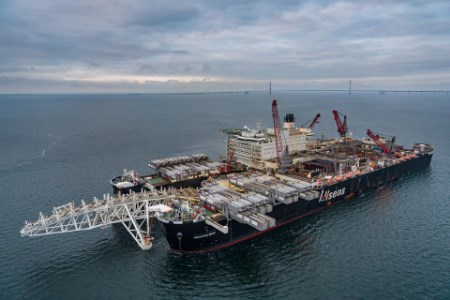 Pioneering Spirit, operated by Allseas, is 382 m long and 124 m wide, and hosts an international crew of 570, whereas Solitaire is 300 m long and 41 m wide with a 420 strong crew. The pipelay vessels are supported by a survey vessel, which will monitor the pipelay process and ensure that the pipeline is installed at its correct position along the agreed route on the seabed. Pipe joints will be supplied to the pipelay vessels around the clock from the project’s nearest logistics hub in Hanko, Finland and Karlshamn, Sweden respectively, to reduce the environmental footprint.

The Nord Stream 2 project is proceeding according to plan and on schedule. It has received permits in four out of the five countries through whose waters the twin pipelines will pass. Since then, works have been carried out according to the national permits in Sweden, Finland, Germany and Russia. Construction works at the Russian and German landfalls are ongoing, and pipelay vessel Audacia finished its work in German waters on 22 December 2018. Already approximately 370 km of pipeline have been laid so far.

Read the article online at: https://www.worldpipelines.com/project-news/02012019/pipelay-vessel-joins-nord-stream-2-construction-fleet/