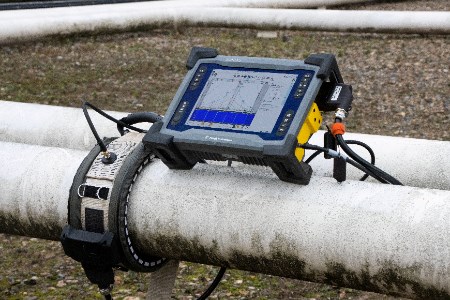 Employing guided waves is a well-established long range ultrasonic testing (LRUT) method for inspecting long lengths of pipes, particularly ideal where range is most important. It is mostly used for LRUT because of the potential to inspect many pipes in a very productive manner, or areas of pipes where access is limited or not possible. GWT uses low-frequency 53 ultrasound operating between 20 - 150 kHz compared to the MHz frequency range for conventional ultrasonics used for pipeline thickness checks. This allows the ultrasound to be broadcast away from the tool and axially along the pipe in GWT. When this broadcast ultrasound encounters a change in cross-section, the change in acoustic impedance of this region causes an echo of sound to return to the tool for detection. Using the welds on a pipe for calibration and comparing amplitudes of other signals to these welds, it is possible to indicate the severity of any corrosion detected. In addition, using other advanced methods such as C-scan imaging techniques and, in Eddyfi Technologies’ case, a unique secondary focusing method, it is possible to report on angular positioning and circumferential extent.

Lower frequencies are used for screening pipelines at ranges greater than tens of metres. These methods and the procedures for this type of inspection are well established and implemented within the industry with global standards published such as ISO 18211. Recent advances in improved equipment and the use of higher frequencies have opened up targeted inspection of pipelines for ranges up to 50 ft (15 m) in length with much higher sensitivity and detectability. This has real potential for solving several inspection challenges within the pipeline industry, from inspection of stainless-steel pipes, pipework, and U-bolt clamp supports.

LRUT has two major selling considerations that differentiate itself from other non-destructive evaluation (NDE) techniques and are the main reason the method is considered a valuable tool in a pipeline inspection programme. The first attribute is productivity, and second is its almost unique ability to inspect pipe areas without the probes having to be situated directly over the area of interest.

More recently, guided wave development has hugely increased and now testing at higher frequencies is proving to be remarkably interesting and important for end users. When testing at frequencies at greater than 100 kHz, the technique is usually described as medium range ultrasonic testing (MRUT). At these frequencies, it is not range of inspection that is most important to the end user but the higher sensitivity and detectability over a shorter inspection length of 50 ft (15 m) or less sections.

Read the article online at: https://www.worldpipelines.com/equipment-and-safety/20062022/guiding-new-inspection-possibilities/