More pipelines have been hit by the Niger Delta Avengers (NDA).

Most recently, ExxonMobil’s Qua Iboe pipeline was hit earlier this week (11 July). The NDA stated: “At about 7:30 pm, the NDA blew up the ExxonMobil Qua Iboe, 48 in. crude export pipeline. When will these international oil companies learn to listen? We said no export.”

The NDA have also said that the group are currently monitoring the pipeline repairs.

However, although there was no immediate response from ExxonMobil regarding the attack, the company has recently said that there had been no attack on its pipelines or facilities.

The group intends to stop the flow of all export pipelines, after Nigeria’s President Muhammadu Buhari refused to address the NDA’s demands. The NDA want to see a larger share of the energy wealth go to the destitute Niger Delta region, as the area is the main source of the country’s crude oil.

Similarly, on 10 July, the NDA set back the country’s oil production by 10 000 bpd after attacking a Nigerian Agip Oil Company (NAOC) pipeline. The group also targeted and damaged NAOC’s trunklines, which connected terminals for Brass and Bonny crude oil warehouses.

Pipeline attacks by the NDA do not seem to be slowing down. The group had previously declared: “Until President Buhari takes our demands seriously and set up a genuine framework to address the Niger Delta question, we will continue to obstruct all avenues to export our crude oil to develop his 97% (95%). In fact, whenever we have any contact to establish a genuine negotiation and dialogue, we will not hesitate to let the world know that we are in dialogue with the government and her representatives.”

Read the article online at: https://www.worldpipelines.com/equipment-and-safety/14072016/more-nda-attacks/

West African Ventures has completed its pipelay and construction campaign for Chevron in Nigeria.

The militant group, Niger Delta Avengers, has demanded a referendum to decide whether Nigeria should be split into separate countries. 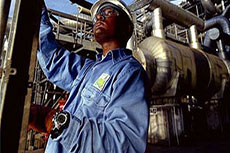 The militant group Niger Delta Avenger is responsible for the sabotage of another pipeline.

A surge in oil and gas pipeline attacks in the Niger Delta is set to continue in the short to medium term.