Enbridge Inc. claims that flow on a crude oil pipeline through southwestern Ontario, Canada, was shut down for several hours by protester activity.

Company spokesperson Graham White stated that the protesters partially restricted flow on Enbridge Line 7 on Sunday night by tampering with a valve.

Enbridge shut down the pipeline for approximately three hours on Monday morning, a company spokesman said, after protesters partially restricted flow on the pipeline on Sunday night by tampering with a valve station.

White says the pipe was shut down as a safety precaution. Maintenance workers inspected the valve station and Enbridge has safely restarted the line. There was no impact on client deliveries.

Responsibility for the sabotage has been claimed by a group online, saying it was to protest the flow of oilsands products through pipelines in Ontario.

Read the article online at: https://www.worldpipelines.com/equipment-and-safety/06012016/enbridge-confirms-sabotage-to-pipeline-during-protest/

The National Energy Board approves Enbridge’s Line 9 pipeline hydrotest results, as it continues its regulatory oversight.

The NEB demands that Enbridge further tests the pipeline, which has undergone a line reversal. 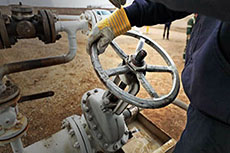