A Gazprom delegation, headed by Alexey Miller, Chairman of the Company’s Management Committee, paid a working visit to Kyrgyzstan. Bishkek hosted a meeting between Miller and Almazbek Atambayev, President of the Kyrgyz Republic. 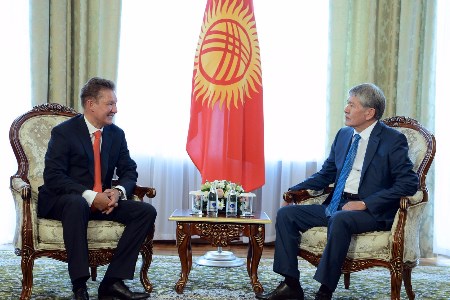 The parties commended Gazprom for its large scale efforts in Kyrgyzstan, such as the reconstruction of gas transmission and gas distribution facilities, gasification and NGV market development, and the implementation of social projects.

Particular attention at the meeting was paid to the preparations for the heating season. It was noted that the company conducted preventive maintenance of gas transmission and gas distribution facilities in strict accordance with the schedule. Kyrgyzstan’s gas supply system will provide consumers with reliable gas deliveries, especially during peak loads in winter.

Miller and Sapar Isakov, Prime Minister of the Kyrgyz Republic, took part in the events celebrating the commissioning of the newly-built section of Phase II at the Bukhara Gas-Bearing Province – Tashkent – Bishkek – Almaty gas trunkline. With the renovations completed for the Phase I section, the gas pipeline’s annual throughput at the Chuy custody transfer point in the Kyrgyz territory was almost doubled, reaching 3.9 billion m3 of gas. The aforementioned efforts were undertaken by Gazprom under the General Scheme of Gas Supply to and Gasification of the Kyrgyz Republic.

“Without a doubt, today’s event has great significance for Central Asia as a whole. The reconstruction of the Kyrgyz section of the Bukhara Gas-Bearing Province – Tashkent – Bishkek – Almaty gas pipeline has taken us to the next level in terms of reliability of gas supplies not only to the north of the Kyrgyz Republic, but also to the south of Kazakhstan,” said Miller.

The Sokuluk gas distribution station and the gas pipeline branch connecting the station to the gas trunkline, both of which were renovated by Gazprom, were also brought into operation on 29 August. By replacing all of the station’s obsolete equipment and reconstructing more than 100 km of pipes, the Company helped substantially improve the sustainability of gas supplies in Kyrgyzstan’s Sokuluk district.

Within the framework of Gazprom’s gasification efforts in the Kyrgyz Republic, a ceremony was held to celebrate the start of gas deliveries to the Ala-Too residential area in Bishkek. Upward of 1650 households in the area have access to gas now.

The ceremonies dedicated to the commissioning of the section of Phase II at the Bukhara Gas-Bearing Province – Tashkent – Bishkek – Almaty gas pipeline, the Sokuluk gas distribution station and the gas pipeline branch, and to the start of gas supplies to the Ala-Too residential area were held via conference call from the new office building of Gazprom Kyrgyzstan. The building was inaugurated on 29 August.

Read the article online at: https://www.worldpipelines.com/business-news/31082017/gazprom-and-kyrgyzstan-working-meeting-discusses-gas-transmission-facilities/