Ukraine’s future role in Europe’s energy security was a key topic at a side event during the WEF Annual Meeting in Davos. The DTEK Group brought together industry leaders and experts to discuss ‘The End of Russian Blackmail and the Revival of Ukraine: A New Energy Security Strategy for Europe'. 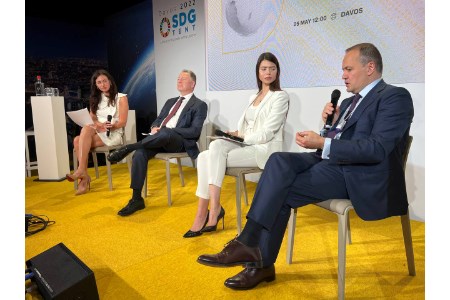 The discussion was moderated by Hadley Gamble, the CNBC presenter and journalist.

Maxim Timchenko, said, "We can't talk about energy without being tied to politics. Energy is integrally linked to a country’s security and its macro policy making, including on environmental issues. A few years ago, Ukraine refused to buy Russian gas and on 24 February, we gave up Russian electricity. For us, it is a fundamental question of our independence.”

“Yet the EU still buys Russia's energy resources, arguing it is an economic not a political decision, just as Nord Stream 2 was once called a purely commercial project. However, there is now absolutely no doubt that Russia has used the EU’s dependence to its political and economic advantage. The EU is effectively financing Russia's military machine, giving Russia both, the money it needs to kill Ukrainians and a tool for blackmail. That's why energy is not just business: it's a matter of national security.”

During the discussion, the speakers raised the issue of commercial cooperation between Ukraine and the EU, including the preconditions for its incorporation into the European energy system.

Maxim Timchenko further stated: "On 16 March, amid the war, Ukraine joined the EU energy network. This was a critical practical step for our European integration. We have been preparing for this for several years, with the final steps accelerated by the war. One of Russia’s key miscalculations is that, by trying and failing to conquer Ukraine, it has pushed us closer to Europe. The next stage in the process will be the beginning of commercial electricity exports to the EU. Europe needs the energy. And we need the income to start the process of rebuilding; we want trade not charity. This is a win-win for the EU and Ukraine.”

The speakers also discussed Ukraine’s capacity to deliver energy from renewable sources. Timchenko: "We are focusing on the development of renewable energy sources, including hydrogen technologies and energy storage systems. Our ambition is that Ukraine becomes a leader in the development of clean energy, delivering a green innovative economy, supporting the European energy security system. It’s also an important part of our plan to rebuild our country after the war. And it’s exactly what Putin fears.”

The key principles and priorities for the recovery of Ukrainian energy, and the country as a whole, were also discussed:

Timchenko: "Ukraine's new energy, which we will build once we have pushed the Russians out, has to be clean and innovative. 55% of Ukraine's electricity is already generated by nuclear power plants. I think this technology will be recognised in the EU as clean and Ukraine should look at small modular nuclear reactors as the next generation of nuclear energy. Another new technology that will be the key to creating Ukraine's new energy sector is hydrogen. And the third component that can unlock the scaling potential of renewable energy sources is energy storage systems.”

“All this requires political decisions, which should be based on three conditions. The first is the existence of a common vision of Ukraine’s future. Second, we need to build trust with international partners to implement joint projects. And third, we need to ensure a favorable investment climate in post-war Ukraine, based on democracy, the absence of corruption and the development of human potential."

The discussion also looked at changes in the world's energy markets, and the strategies of countries and companies that still work with Russia. Maxim Timchenko mentioned the #Stop_Bloody_Energy initiative, created by the DTEK Group, NEC Ukrenergo and NJSC Naftogaz.

‘Stop Bloody Energy’ ran a series of protests in Davos, calling on the world's energy companies to stop cooperating with Russia.

Timchenko: "Russia's energy sector is the primary source of its military funding. Either buying Russian resources or working with the sector means you have made the moral decision to choose money over lives. It gets worse. Don’t make the mistake of thinking the impact is restricted to Ukraine. This is a world war. The consequences are affecting people across the world, particularly those who so desperately need the food grown in Ukraine. Cutting Russian funding by stopping all work with it energy sector is one of the best ways to stop Russian dictator."

Read the article online at: https://www.worldpipelines.com/business-news/27052022/ukraine-can-deliver-energy-security-to-the-eu/