Since 1990, steel has been used in the construction of some of the world’s biggest thrill rides but in recent years it is the steel market itself that has seen all the dips and climbs of a high speed rollercoaster.

Cycles in the global shipping industry

As the global shipping industry went through a major build cycle between 2002 – 2007, demand for steel plate grew over 350%, placing a significant strain on existing mill capacity and driving prices and profitability higher and higher.

However, the inevitable investment in new capacity that followed (around a 200% increase between 2002 and 2007) was followed by the global financial crisis and a major downturn in new ship orders, causing an estimated 85% drop in steel plate requirements between 2007 and 2009.

More recently, the conventional ship market has seen some recovery but is unlikely to reach the heady heights the world’s steel mills had in mind during their expansion.

POSCO and Nippon Steel are both currently trading at 50% discounts compared to 2007 highs and, along with other major plate mills such as JFE and Dongkuk, are looking to align themselves with the offshore industry to revive their utilisation.

On the surface this seems to make sense – the major Korean heavy construction yards of Samsung, Hyundai and Daewoo, the world’s largest buyers of steel plate, have shifted their strategic focus and backlogs significantly in recent years.

In 2013 offshore orders accounted for some 60% of SHI revenues compared to just 20% in 2007. For South Korean yards the offshore industry represents a more efficient, profitable and sustainable future.The problem is with offshore units needing 8 - 10 times less steel plate per US$ of order value compared to conventional ships the country’s mills could well be steeling themselves for a rough ride.

Read the article online at: https://www.worldpipelines.com/business-news/19052014/dw_report_the_steel_rollercoaster/ 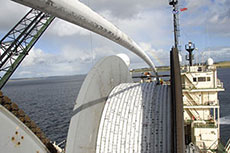