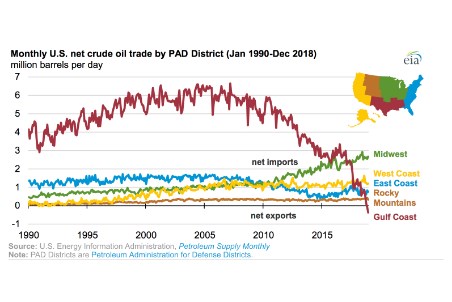 The Gulf Coast is the first region to export more crude oil than it imports since the West Coast saw relatively small net exports in the early 1990s. The Midwest now has the highest net imports of crude oil of any PAD District, averaging 2.6 million bpd in 2018.

EIA’s latest Short-Term Energy Outlook forecasts that in 2020 the United States will begin exporting more petroleum and other liquids than it imports on an annual basis – an observation including not only crude oil but also petroleum products and hydrocarbon gas liquids.

Read the article online at: https://www.worldpipelines.com/business-news/19032019/us-gulf-coast-became-net-crude-exporter-in-late-2018/