Gazprom has recently attended a roundtable regarding oil and gas co-operation, held by CNPC at the Belt and Road International Forum (Beijing). Chairman of Gazprom’s management committee and leader of the company’s delegation at this roundtable, Alexey Miller, noted that natural gas formed the basis for building an effective hi-tech economy. Thanks to its abundant availability, competitive prices, flexible supply channels and diverse fields of application, gas that can help ensure the sustainable development of the energy industry for decades to come. 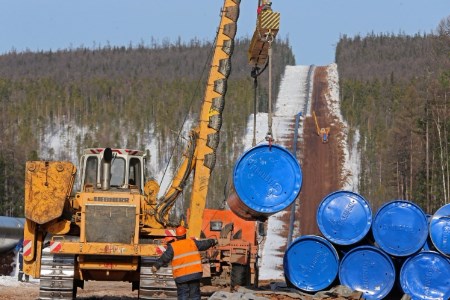 According to a Gazprom statement, Asian countries have a similar vision of the future of the global energy industry. For example, the Chinese Government is implementing a large scale coal-to-gas programme.

While China is one of the world’s largest natural gas consumers, the share of gas in the country’s energy mix is currently 6%. The Chinese Government intends to raise that figure to 8.3% - 10% by 2020. In the context of China’s economy, even a 1% increase for gas could mean tens of billions of cubic meters in gas imports. Such amounts cannot be secured by the growing indigenous production alone.

Gazprom helping China bring its ambitious plans for gas market development to fruition. The company is currently building the Power of Siberia gas pipeline to supply Russian gas to China via the eastern route. As of 16 May, 745 km of the pipeline was built and 1009 km was welded in one string. Gazprom is negotiating future gas deliveries from Russia’s Far East. It is planned to reach an agreement on the supply terms by the end of 2017.

Gazprom’s co-operation with Chinese companies is not limited to gas supplies. On 15 May, three contracts were signed at the Belt and Road Forum to conduct predevelopment surveys for the purposes of creating underground gas storage facilities in China’s Heilongjiang and Jiangsu provinces.

“Gas pipelines not only bring heat to homes, but also serve as a common thread for different economies, helping them thrive and develop. There is no doubt that the steel arteries of our gas trunklines, along with transport corridors running for thousands of kilometers, will become a symbol of the ever-growing strategic co-operation and connectivity between Russia and China in the 21st century, a shining example for the rest of the world,” said Alexey Miller in conclusion of his speech.

Read the article online at: https://www.worldpipelines.com/business-news/18052017/gazprom-and-cnpc-discuss-gas-co-operation/