The Henry Hub spot price rose 11 cents from US$4.56/million Btu last Wednesday to US$4.67/million Btu on 16 March. Across the Southeast region, residential and commercial consumption increased by 1.5 billion ft3/d (74%). Temperatures along the Gulf Coast were colder than normal this report week. In Houston, Texas, the average temperature was 57 °F (14 °C), which was 7 °F (4 ° C) lower than normal. 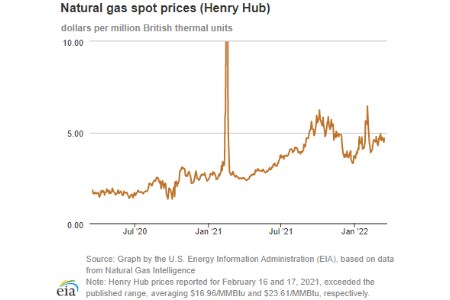 Deliveries of natural gas to the terminal continued to rise this week, averaging close to 0.7 billion ft3/d according to TransCameron, the operator of the pipeline delivering gas to Calcasieu Pass. Cheniere, operator of the Corpus Christi Pipeline, announced planned maintenance at its Sinton Compressor Station in San Patricio County in South Texas, upstream of the Corpus Christi LNG terminal. The work was scheduled to begin Monday 14 March, and to last about a week. Nominations have decreased as a result by slightly more than 0.5 billion ft3/d from 13 – 16 March. Over the same period, feedgas to Corpus Christi LNG has fallen as well, by almost 0.8 billion ft3/d, according to Cheniere. Cheniere’s Sabine Pass terminal received FERC conditional approval on 9 March 2022, to recommission, cool down, and place into service a storage tank that was shut down in 2018 following a leak.

Read the article online at: https://www.worldpipelines.com/business-news/18032022/prices-on-the-gulf-coast-rise-slightly-with-colder-than-normal-temperatures/