Transneft Diascan has held a working meeting with representatives of the Croatian oil pipeline operator Janaf to become acquainted with the production capabilities of Transneft Diascan and discuss prospects for joint inline inspection projects in Croatia. 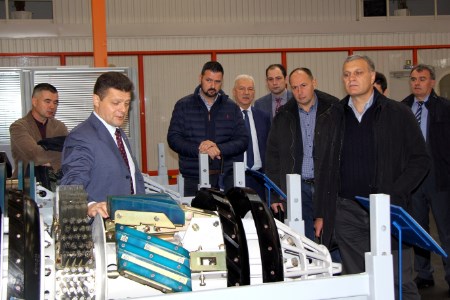 The Croatian delegation was headed by Vlado Zoric, the Director on Pipeline Operation Safety and Security. Transneft Diascan was represented by Viktor Babenko, First Deputy General Director and Chief Engineer.

The delegation visited the inspection workshop where inline inspection tools are developed and assembled and were shown the flagship pipeline cleaning devices, profilers and flaw detectors manufactured by Transneft Diascan. The Croatian specialists also saw the manufacturing process of the electronic circuit for tools. During the tour, the delegation also visited the testing ground for new inspection devices and where flaw detectors are calibrated after repair, as well as the testing laboratory, where the strength and durability of the pipe are checked.

Janaf representatives also visited Transneft Diascan’s data processing centre, where its specialists decode the data obtained during inspections by the company’s devices and make analytical reports on the technical condition of the pipelines inspected.

Read the article online at: https://www.worldpipelines.com/business-news/13112019/transneft-diascan-hosts-visit-of-pipeline-operator-janaf/