The 2019 Annual Energy Outlook (AEO2019) reference case shows continued growth of US natural gas production in the Mid-Atlantic and Ohio region from the Marcellus and Utica formations, resulting in increases of natural gas being transported to the Eastern Midwest and, ultimately, into the South Central region, which includes the Gulf Coast and Texas. 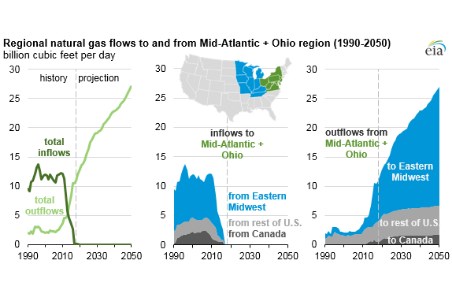 While the South Central region itself contains shale plays that produce natural gas, such as the Wolfcamp in the Permian Basin and the Haynesville, natural gas consumption in the region outpaces production in the reference case, requiring additional supplies of natural gas from other regions to meet growing demand both within the region and for liquefaction facilities that would export natural gas to other countries.

Dry shale natural gas production in the East accounts for over half of this growth as production more than doubles during the projection period from 24 billion ft3/d in 2017 to 50 billion ft3/d in 2050 in the reference case. This forecast growth is driven by technological advancements and improvements in industry practices, which lower production costs and increase the volume of oil and natural gas recovery per well. In the reference case, these advancements have a significant cumulative effect on plays that extend over wide areas that have large undeveloped resources, such as the Marcellus and Utica.

Although historically a net supplier of natural gas to other US markets, the South Central region’s forecast demand growth outpaces its production growth throughout the AEO2019 projection period. Growing US LNG export volumes are the main contributor to this growth as US LNG export capacity is expected to double from 5 billion ft3/d to 11 billion ft3/d by the end of 2020.

LNG exports continue to grow in the AEO2019 Reference case, averaging 14 billion ft3/d by 2030. In addition to increased US LNG exports from Gulf Coast facilities, both US natural gas pipeline exports to Mexico and US natural gas consumption in the industrial and electric power sectors also increase during the projection period in this region. As a result, the South Central region is projected to become the fastest-growing demand market in the United States.

This AEO2019 forecast trend continues the recent reversal of past flows, where natural gas from the South Central region – which includes Texas and the Gulf Coast – traditionally moved into population centres in the Northeast through either the Eastern Midwest or Southeast regions. In 2008, flows into the Northeast averaged 12 billion ft3/d. However, by 2013, these volumes had dropped to 5 billion ft3/d, and today the region is a net natural gas exporter, primarily to the Eastern Midwest.

This reversal of flows was accompanied by increased bi-directional capacity on interstate pipelines and by new pipeline capacity to transport increased natural gas supplies from the Marcellus and Utica Basins to domestic and international demand markets. From 2008 to 2018, pipeline capacity out of the Northeast, which includes both the Mid-Atlantic and Ohio region and New England, grew from 5 billion ft3/d to 23 billion ft3/d, as estimated by EIA.

To transport increasing volumes of natural gas from the Mid-Atlantic and Ohio region to demand in the South Central region, EIA projects that additional natural gas pipeline capacity beyond what is currently under construction will be built from the Mid-Atlantic and Ohio region, primarily through the Eastern Midwest region. In the AEO2019 reference case, an additional 4 billion ft3/d of pipeline capacity out of the Northeast will be constructed during the projection period. This capacity is required to realise the growth in dry natural gas production in the East, and it contributes to growth in both domestic natural gas consumption and liquefied natural gas exports from the South Central region.

Read the article online at: https://www.worldpipelines.com/business-news/13032019/appalachia-gas-production-increase-affects-gas-flow/