Reuters reports that US President Donald Trump launched a sharp public attack on Germany yesterday for supporting a Baltic Sea gas pipeline deal with Russia, saying Berlin had become “a captive to Russia” and he criticised it for failing to raise defence spending more. 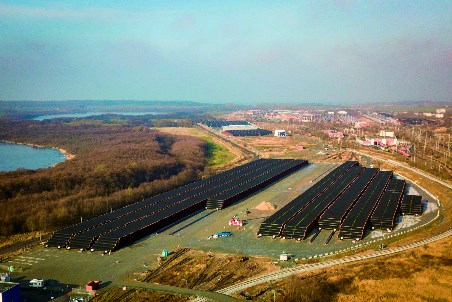 Trump, meeting reporters with NATO Secretary-General Jens Stoltenberg, before a NATO summit in Brussels, said it was “very inappropriate” that the US was paying for European defence against Russia while Germany, the biggest European economy, was supporting gas deals with Moscow.

Berlin has given political support to the building of the US$11 billion pipeline to bring Russian gas across the Baltic Sea (Nord Stream 2), despite qualms among other EU states, reports Reuters.

“When Germany makes a massive oil and gas deal with Russia,” Trump said to Stoltenberg. “We’re supposed to be guarding against Russia and Germany goes out and pays billions and billions of dollars a year to Russia.

Trump renewed his call for other NATO allies to pay in more to the Western alliance after years in which US taxpayers have, he said, borne an “unfair” share of military spending.

Image courtesy of Nord Stream 2 Pipe storage near the German port of Mukran: Pipes are stacked for storage near the northern German port of Mukran, on the island of Rügen. Nord Stream 2’s logistical partner Wasco is coating, storing and transshipping pipes from this strategic location near the pipeline’s planned German landfall. Various stages of these operations also take place at the company’s other three key logistics hubs: the ports of Hanko and Kotka in Finland, and in Karlshamn, Sweden.

Read the article online at: https://www.worldpipelines.com/business-news/12072018/trump-criticises-nord-stream-2-at-nato-press-meeting/

The transfer of EIG’s minority stake in Brazilian gas transmission system operator TBG has been completed.