The invasion of Ukraine is affecting global gas demand with LNG unable to deliver energy security for Europe or the world. 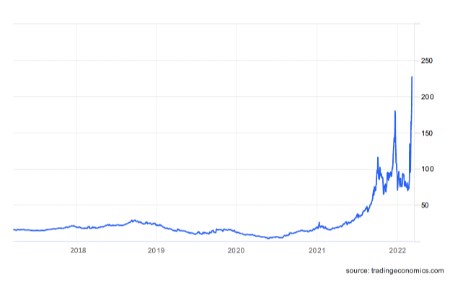 In less than nine months, Europe will be heading into another cold winter, this time presumably without the gas supplies they’ve previously relied upon. Russia’s invasion of Ukraine has highlighted Western Europe’s addiction to Russian gas. It’s also highlighted the globe’s addiction to an unreliable and unaffordable fuel. Around 44% of Europe’s gas comes from Russia. Germany is even more reliant with on occasion up to 75% of its gas Russian-sourced. In the months leading into the conflict with Ukraine, Russia constrained gas supply delivering only contractual minimums to Europe and no excess volumes beyond. Europe had grown accustomed to the luxury of summer spot purchases and when that gas did not materialise, there were no viable alternatives available. Europe entered winter with its gas storages not filled. The global LNG market is finely balanced. Shortfalls meant prices rose to eye-watering levels. The Dutch TTF, the benchmark hub for gas prices in Europe, went from under €5/MWh in mid-2020 to nearly €20/MWh early 2021. This week on 7 March 2022 prices closed at €227.20/MWh. In less than two years, European spot gas prices have risen over 4500%. That’s quite a windfall for suppliers.

Is gas and LNG a fuel fit for purpose in Europe?

To be a viable source of power in an energy system, a fuel must be available for forecast consumption and at an affordable price. Over the past nine months gas/LNG has neither been affordable nor available. Its’ price volatility has been completely untenable and beyond the ability of rational buyers to manage. If purchased, the knock-on effects particularly in emerging economies such as Pakistan have been seriously damaging. Gas, or any energy commodity with such volatility, is not a viable fuel. With an eye on profit, many oil and gas companies have seen Russia’s incursion into Ukraine as an opportunity to increase sales of US and Qatari LNG. The LNG process is intrinsically expensive and adds to the cost of gas. Price aside, the flagged solution of building more LNG import terminals fails to consider one major issue: timing.

Europe, like a drug addict, is hooked on Putin’s gas. That gas — all gas — is now too expensive to buy or burn and supplies are limited. There simply isn’t available LNG capacity globally to supply Europe with gas. Even LNG import terminals with excess import capacity have struggled to find supply from other sources. Gas prices in Asia have risen multiple times from mid-2021 to-date as available LNG spot cargoes redirected to Europe. Any new import terminals in Europe will have trouble accessing supply.

Can Qatar or US LNG fill the gap?

Qatar, the world's biggest LNG exporter until last year, is massively expanding its capacity from 77 to 110 million tpy by 2026. Therein lies the rub. There are at least four [KF1] [BR2] European winters before and if any Qatari gas arrives. Any US intention of filling Europe’s gas gap is feeding into short memories. Europe is beholden to a foreign power that has not treated it well. When President Trump was in power, relationships between some of Europe’s biggest powers and the US were distinctly frosty. Does Europe really want to jump out of Putin’s gas into the lap of Uncle Sam? Europe’s problem is energy for next winter, only nine short months away. The fastest build of any greenfield LNG project ever is the Calcasieu Pass LNG project. Final investment decision to first gas delivered was just two and a half years due to the plant’s design. While other US LNG liquefaction developers have permits in hand, their designs and configurations indicate 3 - 4 years from construction-to-commissioning.

So how can Europe fill the energy gap?

The threat of Russian gas withdrawal is a concern to those dependent on the fuel — it’s also an opportunity. Households’ domestic heaters and industry’s low heat applications will likely be substituted with more efficient electric heat pumps. And country’s investing in energy independence will find homegrown renewable energy faster to deploy than any fossil fuel project without the attendant national security risks. As German Finance Minister, Christian Lindner recently said energy security is the new priority — renewable energy is a freedom energy. Last week the International Energy Agency (IEA) outlined a 10 Point Plan to cut reliance on Russian gas by one third within twelve months. The plan relies on more LNG imports, heat pumps, energy efficiency, temperature control and more low emission generation. A more ambitious plan proposed this week by EU Green Deal chief Franz Timmermans suggests the EU can cut two thirds of its reliance on Russian gas by the end of this year and accelerate the rollout of renewable energy, biofuels and green hydrogen — if governments implement a raft of emergency measures to be proposed to the European Commission. Europe’s choices will impact people locally and gas markets globally.

Linking Europe’s problems to the world

Europe’s gas supply crisis has sucked the world dry of LNG, forcing up prices. Emerging Asian markets have felt the brunt of this with no relief in sight. European-based gas companies have made super profits by defaulting on long term contracts to supply Asia. LNG cargoes are being diverted to the high-priced European market. In the spot market, emerging Asian economies have been unable to secure LNG as high prices have drained the allocated subsidy money. In Bangladesh and Pakistan, unaffordable and unavailable LNG has caused high electricity prices, blackouts and gas shortages. High prices have killed gas demand in emerging Asia.

Globally gas and LNG’s position as a fuel in the energy system is under extreme pressure from geopolitics, lack of competitive pricing, extreme price volatility and inability to supply. Mr Putin’s Ukrainian misadventure has forced Europe into ditching its addiction to gas. Emerging Asia will quickly follow as affordability and volatility saps their ability to purchase an unaffordable fuel. And a cold winter is just around the corner.

Read the article online at: https://www.worldpipelines.com/business-news/11032022/ieefa-at-least-four-cold-winters-before-new-gas-arrives/