A commissioning ceremony for an offshore gas receiving terminal and a floating storage and regasification unit (FSRU) called Marshal Vasilevskiy was held this week in the Kaliningrad Region. 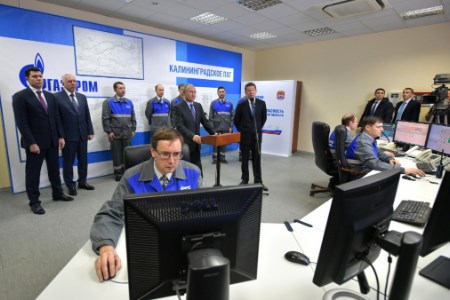 Gazprom makes comprehensive efforts to improve the reliability of gas supplies to the Kaliningrad Region. Earlier, the Company set up the Kaliningradskoye underground gas storage (UGS) facility and increased the throughput capacity of the Minsk - Vilnius - Kaunas - Kaliningrad gas pipeline, the only route for gas deliveries to Russia’s westernmost constituent entity until now.

A key component of the terminal is a fixed marine berth with a breakwater. This facility is unique as far as domestic engineering practices are concerned. It is located 5 km from the shore, where the sea is approximately 19 m deep, which allows the floating regasification unit to be moored. The berth is a 125.5 m monolithic slab of high-strength concrete resting on 177 piles. Special equipment for receiving gas is installed on top of the slab along with mooring devices. From the seaward, the berth is protected with a robust 728 m C-shaped breakwater. Its structure helps the vessel operate safely and is able to withstand powerful Baltic storms.

Marshal Vasilevskiy is the only FSRU in Russia. The vessel transports LNG (174 000 m3 of reservoir capacity) and performs regasification operations, converting LNG to gaseous form.

The regasification process starts at the FSRU as soon as the vessel is moored at the berth. Liquefied gas is converted to gaseous form and fed into the existing gas transmission system via a newly-built 13 km connecting gas pipeline. Afterwards, gas is delivered to consumers or injected into the Kaliningradskoye UGS facility.

Thanks to the terminal and the FSRU, up to 3.7 billion m3 of gas can be delivered by sea on an annual basis. If necessary, the new facilities will meet the current and future needs of the Kaliningrad Region.

“A unique project that has no equivalent in Russia, a sophisticated project of national importance is now completed. The Kaliningrad Region has been provided with a totally independent gas supply route. Gazprom has brought the region’s energy security to a fundamentally new level. The Company will continue to work towards improving the reliability of gas supplies to the Kaliningrad Region,” said Alexey Miller.

Read the article online at: https://www.worldpipelines.com/business-news/10012019/gazprom-furthers-energy-security-of-kaliningrad-region/