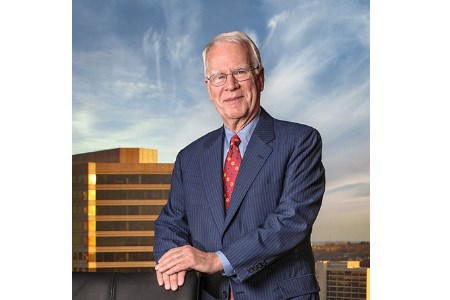 “The Pipeline + Energy Expo (PEXYs) Awards are given as a way of recognising, promoting, and honouring excellence in the pipeline industry,” said Joey Mechelle Stenner, Conference Director. “The awards are a great way to acknowledge individuals and companies who have made significant contributions to the oil and gas pipeline industry.”

In accepting the award, Williamson said, “I wish to thank the organisers of The Pipeline + Energy Expo for this award. To receive something for a lifetime of effort on behalf of an industry I love and have served for so many years is something I shall cherish.”

“I wish to acknowledge my deep gratitude and appreciation for all those I have been blessed to work among – people who were and are committed to build and sustain an industry that is critical to the viability of modern society,” he continued. “My personal thanks to all those who have guided and assisted me and so many others in our journey to become pipeliners.”

Williamson has spent more than four decades in the industry and is widely recognised as a leader in the pipeline, natural gas, and related industries. Williamson is a member of the American Gas Foundation Board of Trustees, serves on the ASME/IPTI (International Petroleum Technology Institute) Board, and has worked to organise four international ASME conferences related to pipeline technology.

Williamson’s deep expertise stems from the fact that he has been with the company nearly his entire life. As the grandson of company founder T.D. Williamson, Sr., Dick Williamson grew up in the industry. He even worked at TDW as a high school student, working on service equipment that was on its way out to the field.

Williamson started with TDW in 1971 as an engineer and has held various management positions. In 1979, he was named Executive Vice President and Chief Operations Officer. He assumed the position of President and Chief Executive Officer in 1992. In 1994, he became Chairman of the Board in 1994. He served until 2016 when he became Chairman Emeritus.

He remains an integral part of the oil and gas industry through his membership and involvement in several professional organisations, including the American Gas Foundation Board of Trustees, ASME/IPTI (International Petroleum Technology Institute) Board, the Oklahoma State Chamber of Commerce, and i2E (formerly the Oklahoma Technology Development Corporation). He has served on the University of Tulsa - College of Business Advisory Board, the Oklahoma International Congress Advisory Board, and Tulsa Global Alliance. Williamson is a past chair of the Tulsa Workforce Investment Board and the Governor’s International Team, and Vice Chair of the Tulsa Committee on Foreign Relations.

“I can’t think of anyone who embodies the spirit of this award like Dick does,” said Jeff Wilson, TDW Vice President of Global Solutions Engineering. “Dick Williamson is an integral part of the oil and gas industry. He knows this business inside and out. He knows the challenges our customers face, and he also has a deep understanding of what it’s like for TDW technicians and engineers in the field. TDW wouldn’t be the same without him.”

The Pipeline + Energy Expo is held annually in Tulsa, Oklahoma. Since its launch in 2009, the three day event has grown become a premier event for the industry and attracts more than 1200 attendees from more than 15 countries.

Read the article online at: https://www.worldpipelines.com/business-news/06042018/tdw-chairman-is-recognised-for-his-significant-contributions-to-the-pipeline-industry/