On 4 May 2017, Trans Adriatic Pipeline (TAP) AG co-hosted a breakfast meeting with H.E. the Ambassador of Azerbaijan to Greece and Dean of the Diplomatic Corps in Athens, Rahman Mustafayev, so as to inform the embassies located in Greece about the progress of the TAP project. The event was attended by representatives of more than 50 embassies, as well as delegates from the Greek Ministry of Foreign Affairs. 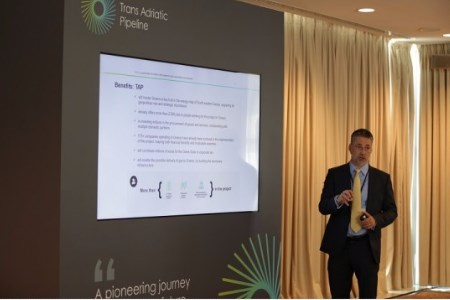 Mustafayev welcomed his peers, and thanked them for their interest and participation in the meeting for the TAP project. "Part of the huge energy investment that is the Southern Gas Corridor, TAP’s implementation is of critical importance on a political, geo-political and business level," he noted. Mustafayev subsequently introduced TAP’s Management, represented by Managing Director, Ian Bradshaw; Project Director, John Haynes; and TAP’s Country Manager for Greece, Rikard Scoufias.

Bradshaw provided general information on TAP, the European leg of the Southern Gas Corridor, its purpose, and what its implementation entails, since it “ensures strategic targets of the European Union, namely energy security and diversification.” He also elaborated on TAP’s progress in its three host countries, as well as the project’s key achievements, thanking all involved stakeholders, contractors, partners and employees for their contribution.

Haynes presented in detail the pipeline’s construction process, highlighting security as the project’s absolute priority, while Scoufias focused on how TAP is being implemented in Greece with respect to local communities, as demonstrated in the engagement and consultation process followed; the extensive communication campaigns launched; the social and environmental investments programme drafted and implemented; and the benefits TAP brings to Greece – both present and future ones.

The event was concluded with a discussion on TAP among the distinguished speakers and guests.

Read the article online at: https://www.worldpipelines.com/business-news/05052017/tap-presents-pipeline-progress-at-a-recent-meeting-in-greece/