Russian production fell by 170 000 bpd from April to May, as the disruption to oil exports caused output to fall to 60 000 bpd less than the OPEC+ commitment. The last hurdle is restoring 750 000 bpd via the northern leg of Druzhba. Due to spare export capacity, however, Russian production will recover in June after falling to 11.1 million bpd in May. 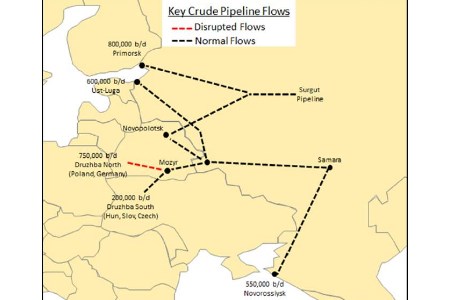 In May, the disruption to oil exports via Druzhba and Ust-Luga caused Russian production to fall more than it would have under the OPEC+ pledge. Russia produced 11.25 million bpd in April and was on the path to cutting production by another 110 000 bpd (to 11.14 million bpd). Instead, output fell by 170 000, according to preliminary data through 26 May. Due to the restoration of some pipeline flows and spare capacity in ports, ESAI Energy believes Russian production will increase from May to June. The map shows selected export routes with the six-month average of exports in the period through April. Russia has only restored nearly half its 1.4 million bpd of pipeline exports to Europe. According to ESAI’s analysis, deliveries of 360 000 bpd to Belarus are fully restored. Additionally, 300 000 bpd of exports via the southern leg of Druzhba restarted as of 29 May. Meanwhile, exports of 750 000 bpd via the northern leg will restart no earlier than 9 June, and could be postponed further. Beside the logistics of removing contaminated crude from the pipeline and restoring the flow of uncontaminated crude, disputes over Transneft compensation to European refiners threaten to delay the restart.

If Transneft needed to, the pipeline operator could compensate for the continued northern Druzhba outage by increasing seaborne exports by at least 750 000 bpd and probably much more. ESAI estimate Russia can export at least 1.8 million bpd combined from Ust-Luga/Primorsk, 400 000 bpd more than the six-month rolling average of those exports through April (see map). It may be that this is how much Russia exported in May. ESAI estimate Russia can export 1.5 million bpd from Novorossiysk, or more than double recent volumes depicted on the map. According to available information, Russia has increased these exports, albeit not anywhere near full capacity. In addition to using spare seaborne capacity in Europe, Russia increased Eastbound exports (not illustrated). For example, May and June exports from Kozmino Bay are scheduled at 700 000 bpd, up from 640 000 bpd in the period through April. Russia may have simultaneously increased pipeline deliveries to China.

Since Russian output has fallen since April, Russia does not need to increase seaborne exports by 750 000 bpd to compensate for the continued Druzhba outage. Higher domestic crude processing also provides an additional outlet for crude producers. Consequently, ESAI believe Russia has more than enough spare export capacity for production to recover compared to the May level of 11.1 million bpd.

Read the article online at: https://www.worldpipelines.com/business-news/03062019/russian-oil-production-should-recover/