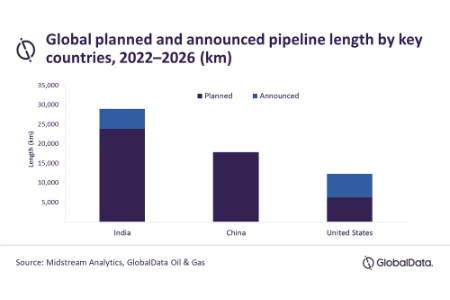 GlobalData’s latest report, ‘Oil and Gas Pipelines Length and Capacity and Capital Expenditure (CapEx) Forecast by Region, Countries and Companies including details of New Build and Expansion (Announcements and Cancellations) Projects, 2022-2026’, reveals that India is set to have a planned pipeline length of 23 839 km, and an announced pipeline length of 5095 km by 2026.

Sudarshini Ennelli, Oil and Gas Analyst at GlobalData, comments: “Kandla–Gorakhpur is the largest upcoming pipeline project in India, with a length of 2809 km. Expected to start operations in 2024, the pipeline project would serve LPG bottling facilities in the states of Gujarat, Madhya Pradesh, and Uttar Pradesh to meet rising demand for the commodity.”

China ranks second globally in terms of transmission pipeline length additions, with a planned and announced pipeline length of 17 810 km by 2026. The Xinjiang–Guangdong–Zhejiang SNG gas pipeline is the longest upcoming pipeline project during 2022 to 2026, with a proposed length of 8972 km. Expected to start operations in 2026, the pipeline will help China meet its ever-growing demand for natural gas.

Ennelli concludes: “The US stands third globally with a planned and announced trunk pipeline length of 12 305 km by 2026. The Seahorse oil pipeline is the longest upcoming pipeline in the country, and is slated to begin operations in 2026. The 1127 km length-pipeline would run from Cushing, Oklahoma, to a refinery in St. James, Louisiana. It would also supply crude oil to a liquid storage terminal planned near the Mississippi river for exports to international markets.”

Read the article online at: https://www.worldpipelines.com/special-reports/24062022/india-to-lead-upcoming-transmission-pipeline-length-additions/