In the EIA’s Annual Energy Outlook 2022 (AEO2022) reference case, they project that US energy consumption will grow through 2050, primarily driven by population and economic growth. In this case, which reflects only current laws and regulations, renewable energy is the fastest-growing energy source through 2050, and petroleum remains the largest share of energy consumption throughout that period, followed by natural gas. 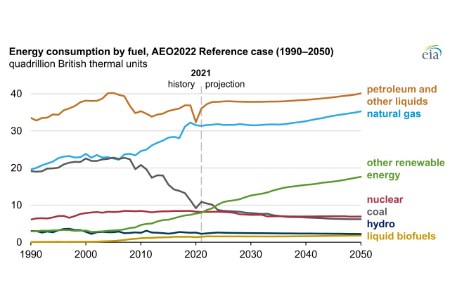 In the AEO2022 reference case, transportation and industrial processes are the primary consumers of petroleum and other liquids in the US. The EIA project that US industrial sector energy consumption will grow more than twice as fast as any other end-use sector from 2021 to 2050. In the industrial sector, the most growth in demand for petroleum is for hydrocarbon gas liquids (HGL) used as a feedstock. Petroleum remains a major fuel for non-manufacturing industries such as agriculture, construction, and mining, as well as for refining processes.

The EIA project that US consumption of natural gas will keep growing, primarily driven by expectations that natural gas prices will remain low compared with historical levels. Starting in the early 2020s, the US industrial sector has been the largest consumer of natural gas, primarily by the chemical industries that use natural gas as a feedstock and by increased heat-and-power consumption across multiple industries. Specifically, the bulk chemicals industry is the largest industrial energy user throughout the projection period, and it contributes the most to the growth in energy consumption in the industrial sector as a whole.

In the reference case, petroleum and other liquids (mainly motor gasoline and distillate fuel oil) are the primary fuels consumed in the US transportation sector. Motor gasoline meets on-road passenger light-duty vehicle (LDV) travel demand, while diesel consumption meets the EIA’s assumed increases in medium- and heavy-duty freight truck travel. As US travel demand continues to increase, consumption of petroleum and other liquids increases later in the projection period, when the EIA assume fuel economy standards remain constant.

Despite continued efficiency gains in air-conditioning, lighting, and other end uses, electricity continues to be the fastest-growing source of energy used in buildings in the reference case. Onsite electricity generation, primarily from solar photovoltaics (PV), grows faster than purchased grid electricity for buildings through 2050.

The EIA project that distributed generation technologies such as solar PV will ultimately supply 8% of electricity consumed in households and 6% of electricity consumed in commercial buildings by 2050. In addition, the EIA project that natural gas consumed for space heating, which is the largest single contributor to both US commercial and residential delivered energy consumption throughout the reference case projection period, declines through 2050.

Read the article online at: https://www.worldpipelines.com/special-reports/21032022/petroleum-and-natural-gas-are-the-most-used-fuels-in-the-us-through-2050/