This is an abridged article taken from the December 2015 issue of World Pipelines. Subscribers can view the whole issue by logging in.

The QUBE Energy wharf facilities in Melbourne are the first stop for coated carbon steel gas pipes from China being used in the APA Group’s VNIE project.

Previous techniques required a crane, a spreader bar and hooks with straps or chains. Ken Colwell, an Operations and Project Manager with QUBE Energy, said that he found that having to hire a crane was a “repetitive exercise” and less cost efficient than utilising company-owned assets and personnel.

“We had the equipment (forklift) onsite,” Colwell said. “We just needed a way of adapting it to lift the pipe. That’s where the Vacuworx product was discovered. Now, instead of dealing with the cost of leasing a crane, we’ve actually improved our ability to perform more precise lifts while bolstering safety and lowering our expenses at the same time.”

While increasing their productivity on the Port of Melbourne wharf was important, Colwell noted that the company was most interested in the safety aspect of vacuum lifting technology.

Colwell stated: “There’s no booms overhead or slings and hooks moving in the air. Everyone can see what’s going on and now our (work) can continue, even in light of wind or rain. It’s a much simpler operation.”

QUBE Energy also realised that the Vacuworx lifting system mitigates damage to pipe coatings. Advanced features such as 360° rotation and wireless remote control allow for precise placement of materials into scalloped timber cradles on the tractor-trailers.

The QUBE Energy team (on average) is able to transport about 90 pipes over the course of an eight or ten hour window, with three drivers each making round trip journeys of approximately 250 km per workday to staging sites in Tallarook, Benalla and MacDow’s pipe yard in Wallan.

McConnell Dowell Constructors Pty Ltd. – commonly referred to as MacDow – is a long-time customer of Vacuworx. On loop one of the VNIE project, MacDow ran two Vacuworx RC 10 lifting systems, in conjunction with Komatsu CP300 excavator host equipment, to unload the pipe at its yard in Wallan, as well as string a stockpile of nearly 1700 lengths along the right-of-way.

Luis Guevara, Vacuworx’s Business Development Manager in Brisbane, commented: “I watched the operator on QUBE’s wharf place his hands on the MC 5’s wireless remote control for the very first time. That initial lift appeared so natural, and it was satisfying to know the lifts we were performing in Melbourne would be reverse engineered, so to speak, when MacDow uses an RC 10 to unload these same trucks in Wallan. It’s interesting to see both sides of the vacuum lifting equation from an industrial setting to in the field.”

Following this, QUBE Energy added two RC 10 vacuum lifting systems to their arsenal; one at Port Melbourne, and the other on a Hitachi excavator for unloading at a laydown yard in Benalla.

With sales support across the world, Vacuworx designs and manufactures vacuum and hydraulic lifting systems for worldwide distribution from its facility in Tulsa, Oklahoma. The company’s RC Series and MC Series material handling systems – which are built for the oil, gas, water, sewer, utility and road construction industries – have lifting capacities ranging from 3 t (6600 lbs) to 20 t (44 000 lbs).

This is an abridged article taken from the December 2015 issue of World Pipelines. Subscribers can view the whole issue by logging in.

Read the article online at: https://www.worldpipelines.com/special-reports/19022016/raising-the-bar-216/ 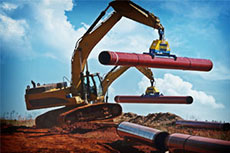 Vacuworx has launched a lightweight pipe handling system to lift and position drill stem in horizontal and directional drilling operations.