For planned and announced hydrogen pipeline projects between 2022 and 2026, Denmark is expected to lead in terms of global length additions, contributing around 35% of the total global hydrogen pipeline additions in this period, finds GlobalData, a leading data and analytics company. 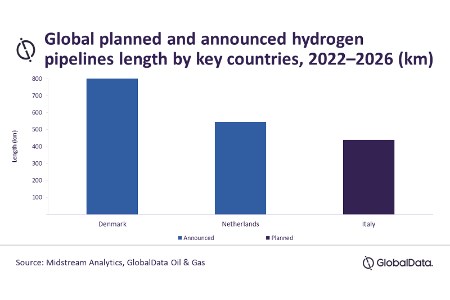 GlobalData’s latest report, ‘Hydrogen Pipelines Length and Capital Expenditure (CapEx) Forecast by Region, Countries and Companies including details of New Build and Expansion (Planned and Announced) Projects, 2022-2026’, reveals that Denmark is set to have a total hydrogen pipeline length of 800 km by 2026 through announced projects.

Himani Pant Pandey, Oil and Gas Analyst at GlobalData, comments: “Holstebro-Hamburg is the largest upcoming hydrogen pipeline project in Denmark with a length of 450 km. Expected to start operations in 2025, the pipeline aims to supply green hydrogen from offshore windfarms in Denmark to Germany to meet local industrial demand.”

Read the article online at: https://www.worldpipelines.com/special-reports/18082022/denmark-to-lead-hydrogen-pipeline-length-additions/