A total of 74 billion-dollar deals were undertaken in the oil and gas industry last year, compared to only 40 in 2020, says GlobalData. The leading data and analytics company notes that oil price recovery encouraged companies to undertake more high-value deals to push forward their growth plans. The largest deal in terms of value for 2021 was announced towards the end of the year, when prices were at multi-year highs. It involved the proposed US$13.9 billion acquisition of North Sea operator Lundin Energy by Aker BP. 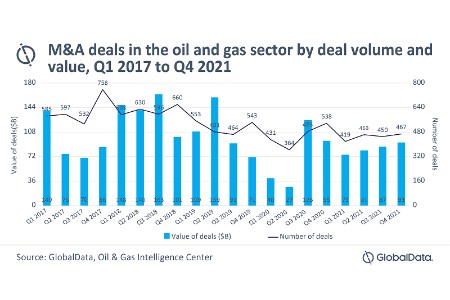 GlobalData’s latest report, ‘Global M&A Deals in 2021 – Top Themes by Sector’, reveals that global mergers and acquisitions (M&A) activity in the oil and gas industry grew annually by 16% to reach US$335 billion in 2021, considering M&As with known deal value. All regions, except China, the Middle East and Africa, reported an increase in deal value in 2021, compared to the previous year. However, in terms of deal volume, M&A activity was largely flat at around 1800 oil and gas deals in 2021.

The upstream sector contributed to the highest M&A transaction value of US$120 billion in 2021. It also recorded the highest growth of 48% compared to 2020.

Ravindra Puranik, Oil & Gas Analyst at GlobalData, comments: “This growth in deal making was largely driven by the shale and subsea themes. The US shale plays, particularly the Permian Basin, remained the most attractive target for oil and gas M&As in 2021. The oil and gas assets in the North Sea also witnessed several deals in the last year, including the one involving Lundin Energy.”

Midstream assets also had a notable contribution to the share of the deals in 2021. This included several high-value deals involving oil and gas pipeline assets in North America, such as Brookfield Infrastructure’s US$11.5 billion acquisition of Inter Pipeline or the acquisition of Enable Midstream by Energy Transfer for US$7.2 billion.

Puranik adds: “As long as the oil and gas industry continues to meet the bulk of global energy needs, there will also be demand for transportation infrastructure, such as pipelines and liquefied natural gas (LNG).”

Read the article online at: https://www.worldpipelines.com/special-reports/16022022/oil-and-gas-industry-witnessed-a-surge-in-high-value-deals-in-2021-driven-by-oil-price-recovery/