For surface preparation in the pipeline and plant construction MONTI - Werkzeuge GmbH, headquartered in Hennef, Germany, has developed the Bristle Blasting process, which uses the pneumatically or electrically operated device, the Bristle Blaster®. This process achieves a level of cleanliness comparable to Sa 2½ and a rough surface profile that allows for better adhesion of the coating, similar to a surface treated by gritblasting. Further, with the use of the Bristle Blaster no abrasive material, no complicated technical equipment nor encasing of the working area is required. Consequently, repair work of small-sized areas such as welded joints can be accomplished far more economically. This is especially useful in areas where blasting is not allowed and rust spots and damages in coatings can be fixed quickly and easily. The technical equipment necessary consists of merely the drive unit and a suitable air pressure or electrical power supply. 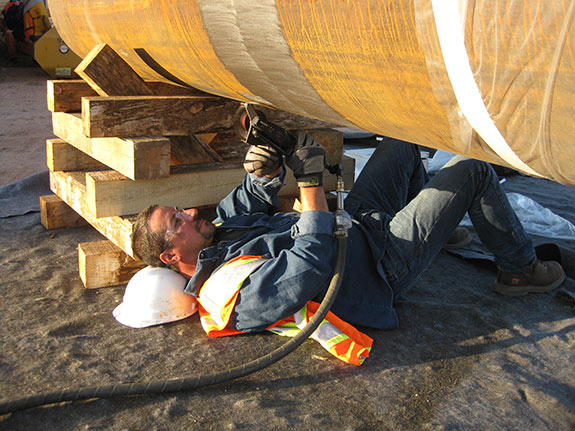 The hand-held drive unit drives the polyamide Bristle Blaster belt, which is equipped with special wires. The U-shaped anchored bristles are sharpened and bent against the rotation direction in a precise manner. During the rotation of the belt the wire bristles are tensioned by an accelerator bar, impacting the area behind the accelerator bar with about a four times higher kinetic energy on the surface. The impact of the bristles removes any corrosion or coating and then a tiny deepening is hit into the surface. Additionally, resistant coatings, scale, temper colours and other oxidation products that are difficult to strip with a grinding tool can be removed effectively and thoroughly. The special construction of the belt causes the wire tips to bounce back immediately after the impact creating rough surface characterized by a variety of micro-craters. The cleanliness level as well as the roughness depth and tensile strength that results from this are comparable with a surface prepared by blasting. Furthermore, studies conducted by the Marquette University in Milwaukee, US, show that a material compression is generated along the Bristle Blaster treated surface, which in turn increases the resistance against cracks, fatigue and stress corrosion.

The resulting roughness depth depends upon the condition and grade of the material being worked on and is – the correct application provided – 90µm Rz, on high grade steel at about 25µm Rz – 35µm Rz. 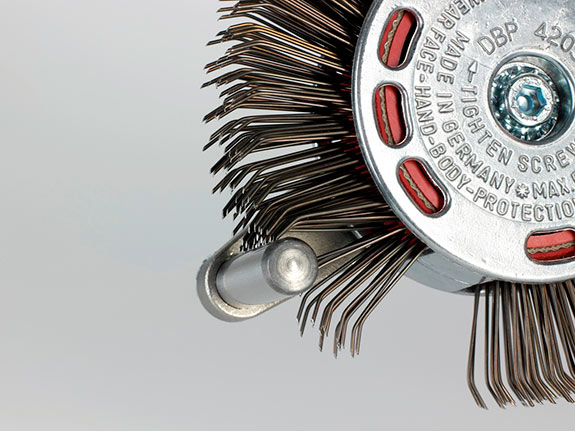 Fields of Application in the pipe and plant construction

Many companies have approved Bristle Blaster for use in general repair work and the maintenance repair (spot-repair) of rust and damaged spots on pipelines. In addition, all admitted coatings as well as post-factory coatings can be removed by Bristle Blasting. The Bristle Blaster is for the weld treatment of immense significance, particularly in station construction as well as in urban areas, because in these locations blasting is often very difficult or not possible at all. Furthermore, it offers an economical alternative to the increasing number of conservation areas as blasting is mostly no longer permitted.

The Bristle Blaster Pneumatic can also be used for work in zone 1 – potentially explosive areas – such as applying it on operating gas pipelines. The device is ATEX approved for use in zone 1 (inflammable gases, steams and fog) according to Ex II 2Gc IIA T4 X (category 2 devices after ATEX 94/9/EC).

The Bristle Blaster weighs 1.2 kg / 2.65 lbs. Complex apparatuses and equipment are not needed and no by-products are produced that need to be disposed. This makes Bristle Blasting a preferential procedure for surface preparation operations.


Read the article online at: https://www.worldpipelines.com/special-reports/15042016/bristle-blaster-patented-technology-for-surface-preparation/