Local surface hard spots, a few tenths of a millimeter thick, but with immense differences in hardness compared to the remaining surface, were a feared problem in linepipe plates for sour-gas service, as it had previously been impossible to control them. With D-TECT, the leading heavy plate manufacturer Dillinger developed an inspection technology integrated into the production process that automatically inspects the plates for these hard spots.

To read the full article
"Dillinger: searching out the hidden facts "
Please sign in or register for FREE 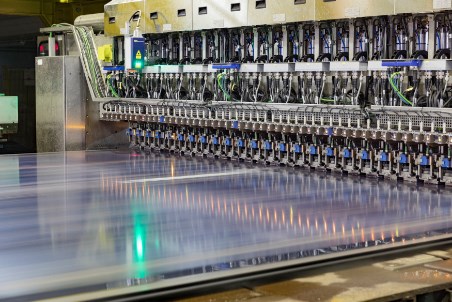 Words can sometimes produce a false impression. The product classification "heavy plate" is a case in point: for the uninformed, there can be an initial assumption that the term refers to something massive and crude, almost primitive.

Looking at the products of heavy plate maker Dillinger in its rolling-mills at Dillingen and Dunkirk, the observer might initially be inclined to affirm the impression outlined above. They may look "small" in the expansive setting of the plant and its equipment, but plates of individual weights of up to 50 t are on their way here through the mill - and "moving masses" is a very apt description.

All the preconceptions concerning a "crude" product are confirmed - but only up to this point. The picture changes at the very first stage following rolling, the inspection bed. Even from here onward, you have to start seeing the expression "heavy plate" in perspective.

Ultra-precise markings are applied for plate identification, sample coupons are stencilled out, and the surface is examined to detect even the tiniest flaws.

There are also defects which even the highly experienced eyes of our human inspection team cannot find. For this reason, the plate is firstly passed through the ultrasonic inspection system, in which discontinuities such as inclusions, porosity, cracks and shrinkage cavities in the interior of the plate are detected.

Automated ultrasonic technology has been in use in Dillinger's rolling-mills for nearly thirty years, in the form of a system installed in the roller table. In other words: all plates passing through this system are 100% inspected. This generates an enormous quantity of data, which could not have been collated using manual examination techniques.

This inspection assists, on the one hand, in detecting and eliminating weak points while, on the other hand, the interlinking of this data with individual production operations in the steelmaking plant and the rolling-mill makes it possible to improve the quality of Dillinger products and to systematically rectify weaknesses. And immediately downstream the ultrasonic inspection system, a new installation, unique anywhere in the world, has been in operation since late 2017. What are the capabilities of this modern system?

To discover this, we will firstly need a little background information: some time ago, pipeline operators in the Asian region reported that lines consisting of longitudinally welded large-calibre linepipes and serving for transmission of so-called "sour gas" – this is moist natural gas containing particularly elevated levels of hydrogen sulphide – were beginning to leak after only a few days of operation, due to cracks running in the wall-thickness direction and caused by corrosion reactions. These pipelines were taken out of service before any incidents could occur, and had then to be reconstructed.

According to information supplied by the pipeline operators, the reason for this cracking was to be found in so-called "hard spots", i.e., small areas on the surface, the hardness of which was greater than that of the remaining pipe surface. These hard spots occurred irregularly and in diverse sizes on the surfaces of the plates. The thickness of hard spots in these zones would, typically, amount only to a few tenths of a millimetre. The difference in hardness relative to the remaining surface was immense, however, resulting in an extremely steep hardness gradient. It is assumed that this surface defect, in combination with the acidic fluid conveyed in the above-mentioned pipelines, was the initiating factor for the cracking.

Linepipe plate for sour-gas service is also a focal product at the Dillingen and Dunkirk rolling-mills, and Dillinger has therefore studied this topic extremely intensively. The aim of Dillinger's experts was the development of a technology which would meet the demands of oil and gas companies for detection of those hard spots on plates for special pipelines as early as during the production process. Dillinger firstly examined the various inspection technologies that can be used to find hard spots on plates at all. A typical linepipe plate has a length of 12 to 18 m, and a width of 1.50 - 4.20 m. The hardness-testing methods available generate indentations of a diameter of around 1 mm!

In co-operation with the Rohmann Company, of Frankenthal, Dillinger's engineers developed an inspection method based on "eddy currents" and capable of detecting such hard spots. This eddy-current technology was firstly installed on manually propelled inspection trolleys (referred to as "hand trolleys"), which were moved on specified inspection paths over the plates by the inspection employees.

Manual inspection technology is highly labour-intensive, however, since both sides of the plate have to be inspected separately. The employees in question have walked more than 6000 km up to now, merely to move the inspection trolleys!

In order to increase capacity and accuracy, Dillinger therefore decided to install an automated eddy-current testing system integrated into the roller table of the rolling-mill, now making it possible to inspect the plates in the uninterrupted flow of production without any major additional effort.

Unlike the old manual system, the innovative scanning transducers used in this new system can, in theory, detect indications of as little as 10 mm in diameter; these hard spots are then eliminated by means of gentle grinding.

Specialists from the major oil and gas companies, who operate pipelines around the world, were involved in this project from an extremely early stage. Alternatives to the thermomechanically rolled and accelerated-cooled carbon steel previously used for these types of pipelines are at least ten times as expensive, signifying that it is also in these companies' interest to find solutions to make carbon steel pipelines for the transmission of "sour" natural gas safer and to resume using this material for their projects.

Dillinger is currently conducting a process of qualification of carbon steel for this application under the new requirements and specifications set by the customers and the pipeline operators.

Experience up to now indicates that the process which causes the formation of these excessively hardened spots can, on physical criteria, not be totally suppressed. As a result, it can be assumed that the eddy-current testing technology developed at Dillinger will provide the most rational approach for the achievement and supply of plates which have been 100% inspected to ensure the absence of hard spots. This inspection system is fully integrated into the production path and constitutes a significant improvement over the previous labour and time-intensive method of inspection using the hand trolley. Thanks to further refined scanning transducers, test results have become even more accurate, and now make possible precise documentation of inspection, as well as simultaneous examination of both surfaces of the plate.

And this, ultimately, is what the end customer wants and needs: maximum possible dependability and comprehensive quality inspection!

To further service the market with this technology, Dillinger has selected a trade name for it: D-TECT. The name is short for Dillinger - Totally Eddy Current Tested. And - because D-TECT is such an elegant term - the Dillinger engineers have named their machine in the style of American action film heroes: D-TECTor.

Thanks to this new technology, Dillinger has already been able to complete exclusive linepipe orders and the new inspection technology also looks set to assure even more business in this field for the company.

So: heavy plate is not quite as "crude" as we might have thought - it is, in fact, an extremely sensitive and finely tested product!

Read the article online at: https://www.worldpipelines.com/special-reports/13092018/dillinger-searching-out-the-hidden-facts/