Gordon Cope discusses the fortunes of the Gulf of Mexico’s oil and gas industry. For decades it has gone from strength to strength, but will its successful run last?

The Gulf of Mexico has been a major petroleum region for the better part of a century. Its vast conventional sources, both onshore and offshore, have contributed billions of barrels of crude. Now, unconventional sources and deepwater prospects have the potential to extend its life for decades to come. 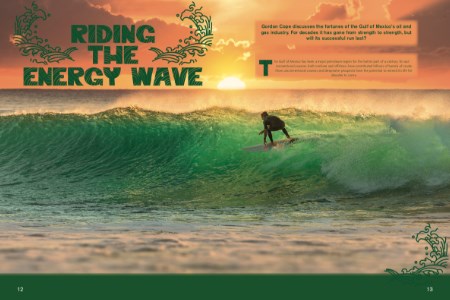 While the original shale boom began in the Barnett shale beneath Dallas, Texas, the most successful unconventional play has been in the Permian Basin in West Texas. According to the US Geological Survey (USGS), unproven, technically-recoverable reserves in the basin’s major reservoirs stand at 46 billion bbls of oil, 280 trillion ft3 of gas and 20 billion bbls of NGLs. In late 2019, production levels in the Permian reached 4.7 million bpd and 17 billion ft3/d of gas.

This has led to a scramble to build pipelines and terminals to deliver Permian oil and gas to market. Plains All American Pipeline’s Cactus II pipeline and EPIC’s NGL pipeline (temporarily in crude service), began operating in mid-2019, adding over 500 000 bpd from the Permian to Corpus Christi, Texas. Phillips 66’s Gray Oak pipeline began operating in late 2019, with a capacity to deliver up to 900 000 bpd to the port.

Major crude terminal projects are also underway. In mid-2019, Energy Transfer Partners announced plans to build a Very Large Crude Carrier (VLCC) terminal at its existing facilities in Nederland, Texas. The proposed COLT offshore loading project would be able to simultaneously load two VLCCs with capacities of up to 2 million bbls each. The project is slated for completion by 2022.

The Energy Information Administration (EIA) noted that US natural gas exports to Mexico reached 5.1 billion ft3/d in 2019, and are expected to rise by at least 10% annually for the next several years. The massive increase is largely being fed by utility and industrial demand. In June 2019, TC Energy completed its Sur de Texas-Tuxpan gas line, a 2.6 billion ft3/d line that runs largely offshore from south Texas to the Mexican state of Veracruz, and will service demand in central and southern Mexico. Several thousand kilometres of regional lines have also been completed in Mexico, with more on the horizon. The final leg of the Wahalajara network, a 900 million ft3/d pipeline connecting the Waha gas hub to Guadalajara, is expected to be finished in mid-2020, allowing Texas gas to reach Mexico’s second largest city.

Natural gas is also being converted to LNG for export. Freeport LNG’s second 5 million tpy train came online in late 2019, with a third slated for late 2020, bringing total capacity of its complex to 15 million tpy. In mid-2019, Venture Global awarded a 10 million tpy contract to Baker Hughes for its Calcasieu Pass project in Louisiana. NextDecade is planning the Rio Grande, a 27 million tpy LNG plant in Brownsville, Texas. To feed the project, Enbridge will build the Rio Bravo, a 4.5 billion ft3/d gas pipeline from Agua Dulce to Brownsville.

According to the EIA, crude output in the US Gulf offshore now sits at 2 million bpd, rising over 100 000 bpd in the last year. The growth has been driven by a combination of infill drilling in existing fields such as Mars, Thunder Horse and Tahiti, as well as the ramp-ups of Chevron’s Big Foot and Shell’s Crosby fields.

The cost of Greenfield platforms in the offshore Gulf has decreased dramatically due to better supply chain logistics, standardised hub designs, and sizing hubs for nearer-term output rather than long-term. Gulf break-evens have fallen to approximately US$45/bbl, and even lower for tie-backs, which are quick hook-ups to existing production facilities.

As a result, more new production is slated to come on stream over the next five years. Operated by Shell, the Vito project – located in the Mississippi Canyon area – has undergone significant modifications since first conceived in 2015. The design has been simplified and standardised, shaving 70% of the costs from the original concept. When it enters production in 2021, the four-column, semi-submersible floating production unit will have the capacity for 100 000 bpd of crude and 100 million ft3/d of gas. BP’s Mad Dog 2 project, expected to enter production in 2021, will have a capacity of 140 000 bpd. The initial cost in 2013 was estimated at more than US$20 billion, but BP and its partners spent three years simplifying and standardising the design, reducing costs by over 60%, to US$9 billion.

In December 2019, Chevron announced that it was moving ahead with the US$5.7 billion Anchor field, 140 miles off the coast of Louisiana in the Green Canyon area. The field has approximately 440 million boe in recoverable reserves. The semi-submersible floating production unit, anchored in 5000 ft of water, will have a capacity of 75 000 bpd and 28 million ft3/d of gas. The US-based company noted that it had reduced CAPEX by one-third compared to its last Greenfield development. First production is expected in 2024. In August 2019, Murphy Oil approved the development of three fields located in the Green Canyon area offshore Louisiana. The Khaleesi/Mormont and Samurai fields will be serviced by the King’s Quay FPS, with a capacity of 80 000 bpd. First oil is expected to flow by mid-2022.

To read the rest of this article, please download the full issue of World Pipelines' April issue for free here.

Read the article online at: https://www.worldpipelines.com/special-reports/06042020/riding-the-energy-wave/