Williams has announced its climate commitment, setting a near-term goal of 56% absolute reduction from 2005 levels in company-wide greenhouse gas (GHG) emissions by 2030, putting the company on a positive trajectory to be net zero carbon emissions by 2050. 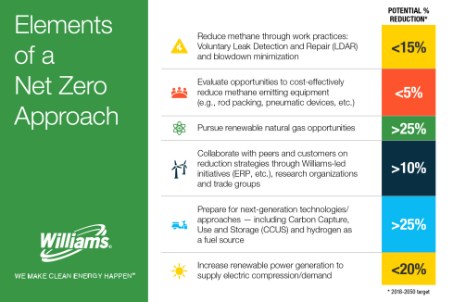 By setting a near-term goal for 2030, the company plans to leverage its natural gas-focused strategy and technology that is available today to focus on immediate opportunities to reduce emissions, scale renewables and build a clean energy economy – while looking forward and anticipating future innovations and technologies.

“As one of the largest energy infrastructure companies in the US, we see firsthand the important role natural gas plays today in a viable and sustainable low-carbon future, and we know that natural gas is critical to addressing climate change. It creates a practical and affordable solution for immediately reducing emissions both here and around the world. It also is key to maintaining reliability and enabling scaled use of renewable energy,” said Alan Armstrong, President and Chief Executive Officer at Williams. “With our climate commitment encompassing both near- and long-term targets, we hope to challenge others to establish similar goals based on what we can reduce right here, right now – while also supporting the development of emerging technologies that will ultimately contribute to our aspiration to be net zero by 2050.”

Other near-term efforts will focus on exploring renewable energy opportunities, including renewable natural gas (RNG) and solar energy. Currently, Williams delivers RNG by partnering with energy companies in Washington, Idaho, Ohio, and Texas to transport methane emissions captured from landfills or dairy farms where the methane is a byproduct of the waste decomposition process. Methane produced from the waste is a renewable fuel because it is captured as biogas rather than being released directly into the atmosphere. Williams’ Northwest Pipeline is interconnected with four RNG facilities, of which two were brought online in the past seven months, and looking ahead, the company plans to aggressively pursue additional RNG partnership opportunities.

These efforts are in addition to the company’s previously announced US$400 million solar initiative across nine states spanning Williams’ footprint. Williams is identifying locations where solar power installations are both economically viable and can be located on company-owned land that is adjacent to existing facilities. Initial sites identified are in Alabama, Colorado, Georgia, Louisiana, New Jersey, North Carolina, Ohio, Pennsylvania, and Virginia.

These facilities are expected to be placed into service beginning late 2021.

“We are proud to lead the midstream space in meeting the growing demand for American-made energy while outlining clear steps toward a clean energy future,” said Armstrong. “We believe we can successfully sustain and evolve our natural gas-focused business as the world moves to a low-carbon future, while also helping our customers and stakeholders meet their climate goals.”

This vision for a viable and sustainable low-carbon future is supported by the active role low-cost natural gas plays in the clean energy mix, particularly when it comes to displacing higher-emission fuels such as coal and heating oil. Natural gas generates up to 60% fewer GHG emissions than coal and is a reliable fuel source, making it the ideal partner for intermittent renewable energy sources like wind and solar power. The company will provide updates on its progress toward these goals in its annual Sustainability Report.

Read the article online at: https://www.worldpipelines.com/regulations-and-standards/28082020/williams-announces-greenhouse-gas-emissions-target-for-2030/