The National Transportation Safety Board issued 14 safety recommendations during a board meeting held on Tuesday in which the agency determined the probable cause for the 23 February 2018, natural gas explosion in a Dallas, Texas home. 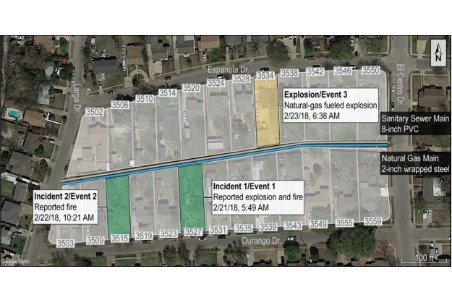 One person died and four others were injured in the explosion at 3534 Espanola Drive, that caused major structural damage to the one-story residence. The NTSB determined that the ignition of an accumulation of natural gas that leaked from the gas main that was damaged during a sewer replacement project 23 years earlier, led to the explosion. Atmos Energy Corporation failed to detect the leak when responding to related incidents at two other homes on the same block in the two days prior to the explosion. The NTSB noted, as part of its probable cause, that contributing to the explosion was Atmos Energy Corporation’s insufficient wet weather leak investigation procedures.

In the report discussed Tuesday, the NTSB found if Atmos had pressure tested the customer piping at the first two incident homes on 21 or 22 February 2018, as soon as it was safe to do so, the data could have more promptly redirected gas leak detection efforts to Atmos-owned piping where leaks were ultimately discovered. Timely pressure testing of the main could have shown it did not hold pressure and spurred additional protective actions that could have prevented the fatal injury at 3534 Espanola Drive. All three homes were served by the same natural gas main. The incidents resulted in significant structural damage and burn injuries to occupants in each home. “Excavation damage to pipelines is not a new issue for the NTSB,” said NTSB Chairman Robert Sumwalt. “This accident highlights the importance of, and need for, thorough incident investigations and more oversight from regulatory agencies to ensure the integrity of the nation’s pipelines is sustained.”

The NTSB found Atmos Energy Corporation’s inadequate investigation of two gas-related incidents prior to the Espanola drive explosion – and its failure to officially report them – delayed the response from regulatory authorities. The NTSB further determined the Pipeline and Hazardous Materials Safety Administration does not provide clear requirements about the level of investigation necessary to determine whether an event is subject to PHMSA reporting requirements, potentially resulting in the underreporting of natural gas incidents.

As result of the investigation, the NTSB issued 14 safety recommendations with three issued to the Pipeline and Hazardous Materials Safety Administration, one to the Railroad Commission of Texas, three to the Dallas Fire-Rescue Department, five to Atmos Energy Corporation and two to American Gas Association Gas Piping Technology Committee.

An abstract of the final report, which includes the findings, probable cause, and all safety recommendations, is available here.

Links to other publicly released information about this investigation are available here.

Read the article online at: https://www.worldpipelines.com/regulations-and-standards/13012021/us-ntsb-issues-14-safety-recommendations-following-gas-explosion-investigation/