DNV has published new procedures designed to provide the required safety level in transporting CO2 by pipelines and strengthen the development of carbon capture and storage (CCS) projects. 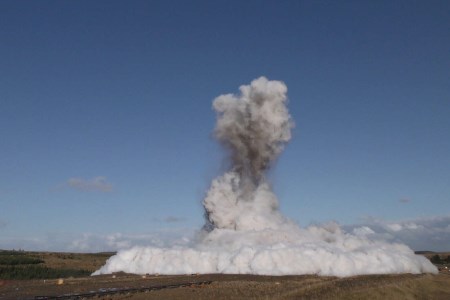 This follows the outcome of the CO2SafeArrest joint industry project (JIP) between Energy Pipelines CRC (Australia) and DNV. The work has been supported by the Norwegian funding body CLIMIT and the Australian Commonwealth Government under the Carbon Capture & Storage Research Development and Demonstration Fund.

The need to transport CO2 is expected to increase significantly in the years to come as part of the widespread view that CCS is a viable means to reduce CO2 emissions. Reliable transport from where it is captured to a storage site is therefore of utmost importance.

An updated recommended practice (RP), DNVGL-RP-F104 Design and operation of carbon dioxide pipelines, has been published based on the results from the CO2SafeArrest JIP, resulting in a new empirical model for the assessment of running ductile fractures in CO2 pipelines.

The JIP involved two large-scale CO2 crack arrest tests being carried out on 24 in. pipelines to better understand the safety implications of CO2 releases. The testing was performed at the DNV Research and Development facility in the UK. The RP can also be used alongside DNVGL-ST-F101 Submarine Pipeline Systems.

Hari Vamadevan, Regional Director UK & Ireland, Senior Vice President with DNV’s Energy Systems business area, states: “We are seeing globally the drive from industry and governments to proceed with CCS and all major routes to successfully decarbonising gas rely on the large-scale uptake of the technology. This RP gives guidance to the industry to contribute and ensure that safe and reliable operations continue to take place as CCS begins to scale worldwide. It also supports the fact that the re-purposing of existing infrastructure can be carried out safely in the future.”

Transport of CO2 can be done either through the use of existing pipelines or the construction of new pipeline systems. DNVGL-RP-F104 is supporting both the design of new pipelines and the reuse of existing infrastructure by describing a process of how to re-qualify the pipelines for CO2 transport through various steps. Requirements for re-qualification is primarily identified through a change of medium in the pipeline, for example, from natural gas as in the original design, to CO2.

Both for new CO2 pipelines and re-qualification of existing pipelines, the operators of the pipelines need to fully understand the threats, failure mechanisms, consequences and probabilities of pipeline failures in order to ensure that they are operated safely.

The April issue of World Pipelines includes a regional report on oil and gas pipeline activity in the Gulf of Mexico, along with technical articles on corrosion prevention, unpiggable pipelines and repair and rehabilitation. Don’t miss the article on hydrogen pipelines!

Read the article online at: https://www.worldpipelines.com/regulations-and-standards/09042021/dnv-updates-carbon-capture-and-storage-ccs-recommended-practice-as-the-energy-transition-picks-up-the-pace/