Nord Stream 2 AG has obtained the permit to construct its planned pipeline system in the Danish Exclusive Economic Zone (EEZ) south-east of Bornholm. The permit was granted by the Danish Energy Agency, which is in charge of the application, and covers a 147 km long route section. 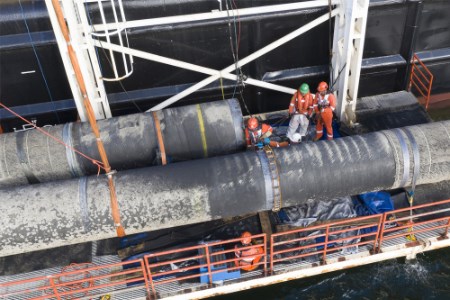 “We are pleased to have obtained Denmark’s consent to construct the Nord Stream 2 Pipeline through the Danish continental shelf area in the Baltic Sea south-east of Bornholm. We will continue the constructive co-operation with Danish authorities to complete the construction of the pipeline,” said Samira Kiefer Andersson, Permitting Manager Denmark at Nord Stream 2 AG.

Preparatory works, such as the installation of concrete mattresses and rock placement for the crossing of existing infrastructure (cables and pipelines), and the subsequent pipelay, will start in the coming weeks. The Danish section of the pipeline will be built with pipes currently stored in Mukran, on the German island of Rügen.

As of yesterday, more than 2100 km of the Nord Stream 2 Pipeline have been laid. Pipelay has been completed in Russian, Finnish and Swedish waters, and for the most part in German waters. The construction of both landfall facilities in Russia and Germany is nearing completion.

The Nord Stream 2 Pipeline will ensure safe and stable supplies of gas to Europe. With this access to competitive gas supplies, European customers will be able to save billions of euros on their gas bill according to the University of Cologne EWI. Nord Stream 2 has invested more than €6 billion. This creates jobs and growth across Europe, as more than 1000 companies from 25 countries have been working on the project.

Read the article online at: https://www.worldpipelines.com/project-news/31102019/nord-stream-2-granted-a-construction-permit-by-denmark/